VA/CO/IL (AND BEYOND): CRUMPLED TWENTY 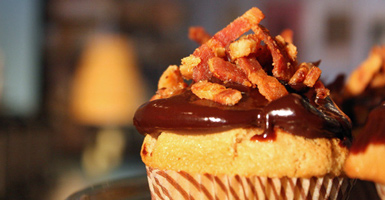 The Best Link Today:
At the risk of becoming a cupcake blog, when all I previously did was whine about their inescapable presence, I just had to link to Tasting Table's Everywhere post about the trend towards bacon cupcakes.
I mean, BACON CUPCAKES.
Here on Fairfax, I've previously mentioned a resto called ANIMAL (actually featured for a new insane Loco Moco fois gras situation on Tasting Table's LA post at the same time).  Anyway, they make a signature bacon chocolate crunch bar, which is the closest thing I can think of to this wild phenomenon.
Now, I'm a true believer in a sweet/salty combo.  I know I've gone on and on about Fleur de Sel Eclairs at Boule and I'll never turn down a chocolate-covered pretzel, BUT this crazy cupcake and bacon sitch is something I'll have to try before passing judgement.
Fortunately, although the spots cited are in Chi Town, Virginia (lucky, Anju) and Boulder, apparently Chicago's Bleeding Heart Bakery (promising punk rock pastries—hmm) will deliver.  So, you really can try it anywhere.
And if anyone happens to do that (or just live in the right city), I'd like a full report, please!
Cause, you know, the proof is in the bacon.
xo – N.