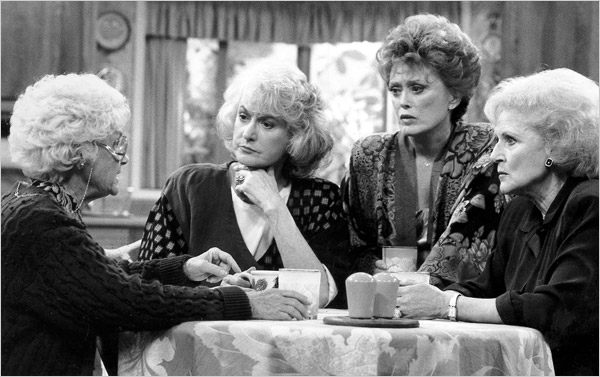 How weird is it that I made a Bea Arthur reference on POCKET LINT on Friday and then the iconic actress died over the weekend?  I guess it's not that strange, since I tend to make Golden Girls references on the regular.  Just another testament to how impactful Ms. Arthur was in her lifetime.  I haven't been this bummed since Jerry Orbach died.

Jesus.  I really am a grandma.  It's like they forgot to erase some part of my memory before they sent me back down to earth from heaven (you know, like in Chances Are–Robert Downey Jr.?  Cybil Shepard?  Anyone?  Anyone?).  I think that's maybe grandma of me to reference too?

Eh, at least I'm well suited to The Drewser, who likes to chow down on nast grandma candy like Jordan Almonds, Peanuts Chews and MaryJanes.

So, The New York Times ran a great obituary and also Rue and Betty commented on the loss too via US Weekly and Entertainment Weekly.  Seems like they were all just as close you would imagine and hope (although maybe most of you spent less time thinking about it then I did).

Here are some other celebs responding.