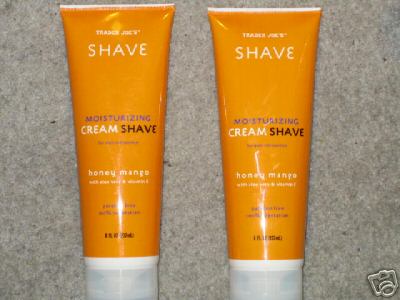 My last "Guinea Pig" posts were a bit of a bust.

I mean, my eyelashes DEFINITELY grew thanks to Revitalash, but then I had to discontinue use when I found out that there's a minor chance that my eyes could change the color due to some glaucoma fighting ingredient in the stuff.

Still, here I am trying something new again.  Something a little less risky, I'll admit.  My friend B. tipped me off to Trader Joe's incredibly inexpensive Honey Mango Cream Shave and raved that it was literally life changing and totally unbelievable.  Well, I clearly have to find out for myself, so I'll be heading out to the brand new Trader Joe's at Sunset 5 (Yay!) to buy the stuff and test it out.

My legs definitely require some seriously moisturizing shaving cream/gel shagangs, so we'll see if this $2.99 sitch measures up.  I think maybe it's copy of (ahem, homage to) Alba's pricier version (normally upwards of $6)?  I'm inclined to buy both actually and "taste test" so to speak.  At least as of now, I don't actually plan to eat it, but you know . . . if I get hungry enough on my stupid diet.

I'll be back (with an Arnold accent in honor of the new Terminator).  So timely, no?

P.S. Props (yeah, I said props) to whoever took the above picture.  I found it online and have NO idea who took it.  Sooorrry.