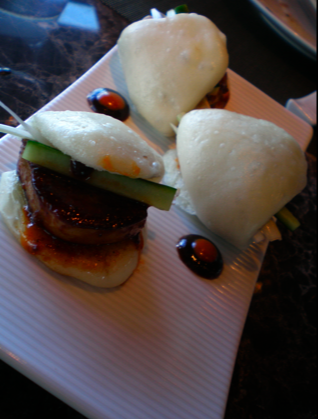 I am not the biggest fan of foie gras.  And, for better or worse, that's mostly not for political reasons.

I don't usually eat ducks because I think they're cute.  (There's a related sad story behind it to which I won't subject you all.)

And I don't generally do foie gras because, well, I don't really like the idea of creamy meat.

So, during dinner with N.E. & S.H. a couple weeks ago at Wolfgang Puck's new WP24 restaurant way up atop the new Ritz Carlton at L.A. Live, when the chef sent out the above fois gras buns with sweet and tangy hoison sauce, I was skeptical.

Still, I am willing to taste just about anything and boy am I glad that I did: The buns were unbelievable, sort of reminiscent of the pork belly buns at Momofuku Noodle Bar.  Actually, if I'm honest, I sometimes have issues with pork belly too because of the fattiness.  But, in both cases, the result is beyond delicious. 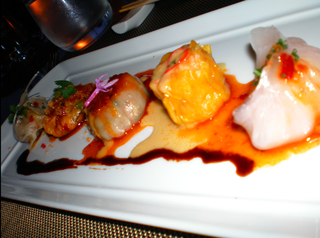 The dim sum-esque assortment of dumplings was also totally tasty and so pretty–right?

If I had to choose one genre of food to eat for the rest of my life, it might very well be Asian, so I'm always happy for a new Asian spot, specially if said spot has such awesome views.  I almost like it enough to brave parking nightmare and tourist trap L.A. Live again.  At least it's the best reason I've experienced yet.