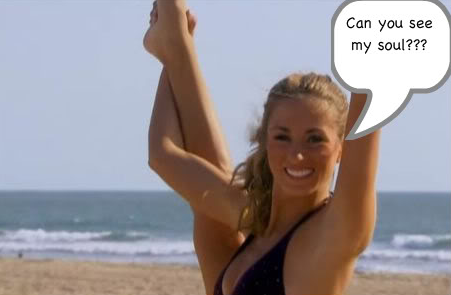 For the first time in a few weeks, I turned on Bachelor Pad tonight and, lo and behold, it's the season finale!  I missed a few weeks, so I'm totally lost.

I'm not gonna get lost when it concerns these monkeys.

Elizabeth is still orange from spray tan and now she has a weird stripe on the top of her head and she's still psycho (that dance teacher should expect a dead rabbit in the mail any day now).  Kovacs still doesn't like her no matter how much she blackmails him.

Kiptyn and Tenley give new meaning to the word "vanilla."  Hi Kiptyn's bald spot!  I missed you!

David is still date rape aggressive and Natalie is still begging people to touch her boobs.  They're a perfect couple!

After some of the worst dancing in the history of this and any other universe, Kiptyn says choosing who will go to the finale is one of the hardest decisions of his life.  He's clearly had it really hard thus far. Elizabeth says that hopefully she won a relationship with Kovacs, which is worth $250,000.  Except not so much because he was already like struggling not to hit on the dance teacher.

Enter "live studio audience" full of even bigger losers than me.  In really happy news, Elizabeth's hair is brown again.  THANK GOODNESS.  What shameless colorist agreed to make that psycho a blond?  And why doesn't Melissa ever smile?  Is it me or does she have no charm AT ALL as a host?

Wes and Gia tongue it down–My eyes! My eyes!!!  And suddenly it's Survivor: Everyone gets to ask questions and then vote on who gets the money.  No offense, Chris, but where is Jeff Probst?  LOVE Jeff Probst.

My favorite character on this show is the audience.  Is it just me or are they just booing and cheering arbitrarily.  Maybe they're drunk?  Can I give the audience $250,000?

Also, I think they should have a reality show starring crazy Michelle, crazy Craig and crazy Elizabeth.  Imagine?  Who would watch the other one sleep first?  They'd have to take all the knives out of the house!

And the winner is (spoiler alert!) … you.  You get to watch real TV now that summer is over!