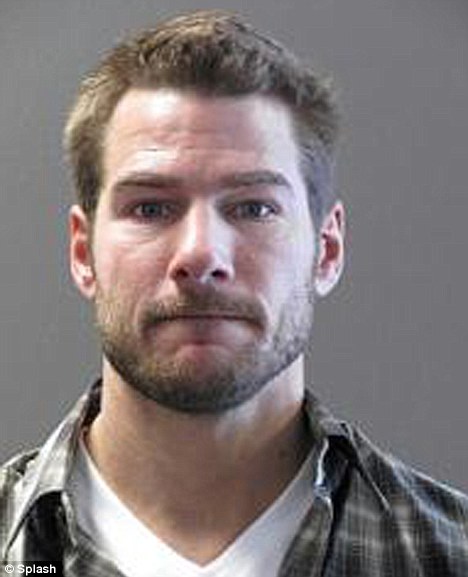 This is Brad's mugshot for driving with a fake license.  Actually, at the time of his arrest, his name was Stephen Bradley Pickelsimer.  Yup.  That's his mother's last name.  He changed his last name to his mother's because of his daddy issues, apparently, but then he changed it back because, well, probably because it was "Pickelsimer."

This has nothing to do with this episode, but I am reserving the right to refer to him as "Pickel" for the rest of today.  It just gives me joy.

So, at the very beginning, Michelle almost sounds normal, talking about how all she can do is be herself.  Then she adds, "Or pray that Chantal O. gets attacked by monkeys."  Ah, Michelle.  You never fail us.

Pickel goes on a rainy zip-lining date with Chantal O. – upping the chances of the monkey attack – and I'm starting to doubt whether he will ever reject a girl on a one-on-one.

Chantal O. is a little Deanna to me.  Am I alone in that?

Anyway, Pickel tells Chantal that, "This could happen every night."  Totally.  That's a REAL relationship.  Like every night The Drewser and I go zip-lining, then we come in from the rain and I put on his over-sized white button down and then we make out, while a camera crew films.  Then we fight about who will do the dishes and/or scoop the cat boxes and then we go to bed and play tug of war with the comforter.  It's amaaaaaaazing.

Apropos of nothing, Britt makes me boooooored.  On the group date, they are repelling down a waterfall.  They're also repelling me.  Michelle is mad cause Pickel is breaking their promise to each other, never to repel with anyone else.  Now, that was a serious vow.  Maybe now she will cast a spell on him.  Or release her monkeys.

Jackie is afraid of heights.

Wait.  Who the hell is Jackie?  Apparently, she's a NYC artist.  Um.  Really Jackie?  I would like to see that art.

Pickel is so dumb.  He still doesn't know that Michelle is insane?  Eh.  Maybe he's just waiting to sleep with her at least once.

Emily sabotages relationships, which makes Pickel worried, even though he should realize that she's A) being honest and B) using it as a ploy to get some alone time.  But he's a dumby.

On the upside, he does seem a bit irritated with Michelle.  He actually rolled his eyes.  He is OVER these girls bitching.  Yeah, beaatches!  No rose for ANY of your asses!!!  Boooyah!  This is the Pickel I can get behind.

Michelle says that if he doesn't make a decision, she'll be forced to take matters into her own hands.  What does that even mean?  She is scary pants.  I'd sleep with the lights on in that house.

They keep saying that Costa Rica "could be an amazing place to fall in love."  What does that mean???  Like how many hypotheticals and qualifiers can you pack into a single sentence?

Ali FREAKS the fuck out because of bats.  I'd be more scared of having to picnic in a dank wet cave, supposedly the reward.  They're all at Tabacon hot springs, where I've been, but I think I would need to have it all cleaned and Purelled before going back.  Meanwhile, this date is AWK.  Okay–fast forward, please.  I don't need to watch this.

No rose for Jennifer Garner.  I mean, Ali.  They have the same man jaw.  Sorry.

Then, Michelle just shows up at Brad's door.  Pickel, haven't you ever watched the show?  It's ALWAYS the crazy people who do that!  Pickel REALLY wants space.  Until she starts hooking up with him.  The Black Widow strikes again.  But she's dumb too.  She keeps telling him what to do and it's so clear that he doesn't like it.  Man up, Pickel.  GET. A. GRIP.  Tell her to hit the road.  She's TELLING you what to do on national TV.  He thinks she's bossy, but I don't think he knows she's crazy.  I know that seems nearly impossible, but I really think it's true.

Do we think Pickel really likes Emily or just wants to?  I think she's the bestest, but that's just moi.

Anyway, despite a leopard print dress and up-do that should have sent Chantal O. home automatically despite her rose, as it aged her about 25 years, Jackie goes home.  Maybe to paint a picture of the Brooklyn Bridge or something.

Then, they're off to Anguilla, where it looks like Michelle and Pickel get down and dirty in the sand for yet another photo shoot, probably for UNICEF or something.  They're just so damn giving.