THE LINT COLLECTOR: ASHLEY & HER ABS, SITTING IN A TREE 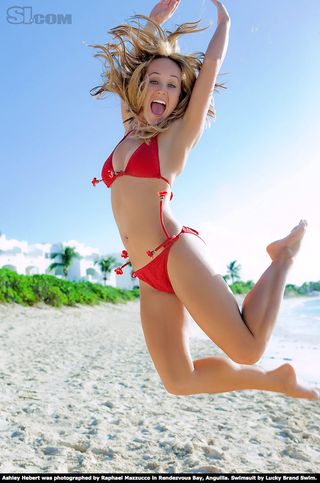 As usual, the show begins with Chris Harrison and a date card.  All the men want the one-on-one, including the masked man (who shall here-on-in be dubbed "The Lone Loser").  He says, "I'd love a date with Ashley.  I think she's beautiful."  Whoa there, Tonto.  Aren't looks not supposed to matter to you?  Isn't your whole "thing" that people are too superficial?  Isn't that why you're the douche bag in a MASK?

Anyway … she chooses William, who is a less hot Josh Lucas and they're off to Vegas via (surprise!) private plane.  They have the weirdest, most twisted date ever, where they like simulate a wedding.  She makes him say "I do" and then she laughs at him basically.  Whatever.  They kiss.  She says she likes him.  Turns out that they both have alcoholic fathers and William's died.  What a strange coincidence.  It's almost like someone planned it that way.

All is confessed in the middle of The Bellagio's fountain, not to, like, attract attention or anything.  He gets the rose.  Blah, blah, blah.

Group date time: Everyone is off to Vegas.  We've all seen the scenes, so we know that they'll be traveling the whole time.  Instead of gambling or something actually fun though, they have to watch her dance and then dance with her.

Really, Ashley?  That's how you're going to pick your husband?  I'm not sure you want to marry a guy whose at home in a sparkly costume on a Vegas stage.  Just saying.

Most importantly, Ashley gets to show off her abs, which are admittedly impressive.  She should just marry her own abs.  The guys separate into troops to dance to some sort of hip hop-type sitch.  They look like fools.  There's really nothing else to say.  It's all very very white.  Seriously.  I'm a little embarrassed to be caucasian.

Anyway, Ashley wants to treat the "after party" like a one-on-one with each dude.  West wants to tell her that his wife died.  (P.S. There are some shady whisperings about a shared drug problem and a potential overdose or something that caused her death?  Chime in, if you know more.)  She seems sorta interested, but weirdly not as emotional as about William's father.

Bentley gets bleeped talking to camera about how Ashley has "an amazing butt and rockin' legs and having her tickle my *butt hole* would be amazing."  Charming.  Chaaaaarming.  (And, yes, I rewound three times, until I could read his lips.)  He says she's not his type, but he's competitive.  And she gives him the rose.  Because his butt hole is convincing, I guess.

The chef Mickey wins the next one-on-one on a coin toss.  (I have never seen him before.)  They flip a coin for EVERYTHING going forward on the date.  ANNOYING.  It's weird cause this guy is good looking, but he also sort of resembles Marcel from Top Chef.

Lo and behold, his mother died too.  Do these producers have NO shame at all???  And it's awkward two person concert time.  Oh jeez.  I'll spare you the details.

Then, it's cocktail party and rose ceremony time.  Ashley makes out with JP (the bald guy).  The Lone Loser explains that he had a brain hemorrhage at 29-years-old, which affected his short term memory.  Is that also why he has no sense of humor?

And Bentley has GOT to be pretending to be a bigger asshole than he would normally be.  I mean, give me a break.  He so obviously planned this whole thing with his moronic, date rapist frat brothers.  I don't even feel like he's pulling it off.  He seems awkward about it (which he should BTW cause he has a KID).  His daughter is going to be sooooooo proud of him one day.

Anyway, I shouldn't even waste breath on him, but he says kissing Ashley is boring.  He's worse than Wes with Jillian, however many seasons ago.  She says she's falling for him and squeezes his face like she's his 80-year-old aunt.  It's sort of painful.  He's not even cute.  And what is he proving?  That he can prey on some helpless pathetic girl by pretending to be nice?  It's really putting a damper on my hating on her.  I actually feel bad for the girl.

Some guys get sent home, but no one I really recognize.  One guy who gets voted off calls his mom and asks her to make him French toast.  Yum.  French toast.  And, with that, we chill 'til the next episode …