LA (AND BEYOND): THE FUNNIEST EMAIL EXCHANGE [AND THE NEXT ADDITION TO JUDD APATOW WEEK]

This is old news.  I admit it.  I'm late to the party, the not so early bird without a worm, the girl with the dragon stuffed animal.

What?  Seriously.  What are you talking about?

Anyway, the point is that you may have already read this email exchange from 2001 between Judd Apatow & Mark Brazill, but I hadn't until the Drewser showed me it last night.  Since I'm in the midst of a Freaks & Geeks marathon and basically couldn't think about anything else if I tried, I thought I'd pass this on to you.

Because it's genius.  And it begs the question: Is Apatow's wife, Leslie Mann actually as crazy as she plays in his movies?  Cause she's apparently been freaking out about their house for years.  Well, probably their old house.  Now that he's had so much success in the last few years, I bet they bought a new house.

Hmm.  When does TV viewing crossover into stalking?  You may be witnessing that moment right now.

Anyway, check it out.  At the very least, now you can tell people you read Harper's.  You're oh sooooo intellectual.  This blog is really high-end.

P.S. Should someone tell Brazill that he spells his last name wrong?

INDIA (AND BEYOND): SHAMELESS SELF-PROMOTION [VIVANTA in T + L] 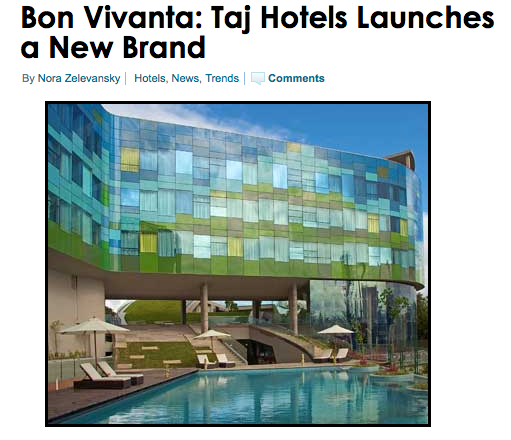 Happy Monday!  Don't you wish you were in the above instead of at your desk?

Eh.  It's kind of a far flight away.  (Does that make you feel any better about being at your desk instead of in the pool?  I'm trying!)

ANYWAY, you can read all about the above on Travel + Leisure today in a post by yours truly: Upper upscale hotel brand Taj has launched a new brand called "Vivanta" for the younger, cool kid set.  Extra, extra.  Read all about it.

Meanwhile, I'll be busy distracting myself by watching DVD after DVD of Freaks & Geeks for the first time ever.  It's like I've discovered the TV holy grail.  Seriously.  I may not leave the couch for like four days.