LA (THIRD STREET): EASTER CANDY INNOVATION [What happens when you roast a Peep?]

Okay, so here I was seconds from telling you all about my most amazing find: Chocolate-covered Peeps at Joan's on Third.  I was going to talk about being a Cadbury Cream Egg devotee with an occasional penchant for Peeps (only when stale).

But, then, I went in search of an image for this post because, per usual, I ate the entire delicious package before I remembered to take a picture and I discovered that Peeps themselves have had the same brilliant thought as my local gourmet market (though surely in a less upscale incarnation).

The whole investigation provoked some serious contemplation: If Peeps could be successfully dipped in chocolate than how else could we innovate them?  Their website posits recipes for Peeps macaroons (for the Jews!) and rice crispy treats, but those seem just to entail tacking the yellow and pink marshmallows on at the end.

Let's get serious and ask the hard questions: What in fact happens if you roast a Peep?

The bad news is that I have no idea.  The good news is that I plan to find out tomorrow and then tell you all about it.  Because that's the spirit of Easter, you know?  It's all about sharing!  (Or, not really, but that's a good message too, right?) 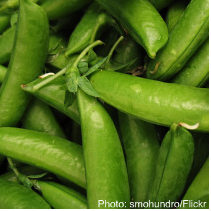 The Best Link Today:
At my parent's house, Passover dinner doesn't usually stray too far afield.  Occasionally my mother gets some hair-brained idea to make Middle Eastern chicken or cornish hens in place of pot roast (GASP! I had to make it myself last year!).  But, usually, thank goodness, she only mixes it up with slightly varied briskets (all delicious–even the Weight Watchers one from her dieting period!), kugels and white and red horseradishes.  And, this is LA, so we are blessed with the occasional Mexican Jewish guest, who cooks us up some amazing unleavened dish from south of the border.  Ole.
I thought I had it pretty good in the eats department.  And, okay, I really do.  But then today I read Tasting Table's write up about Chef Evan Kleiman's Italian Passover feast at Angeli Caffe and I started to crave her signature Passover veggie side, cianfatta.  TT offers a recipe, so maybe (though ya'll know my cooking skills lack), I'll try to make it for this year's Mexican, Jewish, Italian feast.
Shalom, Bella!
xo – N.