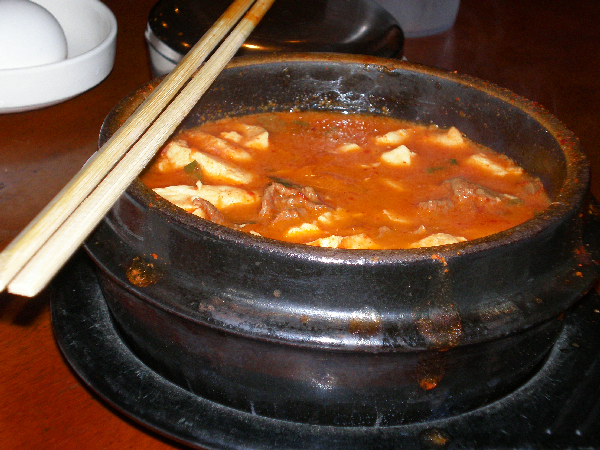 (Signature Spicy Tofu Stew From Tofu Ya)
My father has a gift.  Well, it's more like curse.  Like that infamous nursing home cat who gravitates towards residents just before they die (who's creepy legacy seemingly inspired this week's House episode), my father falls in love with restaurants just before they, inevitably, close.
Much like other unlucky coincidences (the Kennedy Curse, for example, which can mostly be explained away by high-risk behavior like skiing drunk backwards down a hill playing football, flying a plane without deep knowledge, becoming–or running for–President), my father's penchant for lesser known spots sans crowds combined with his love of oddball flavor profiles probably doesn't help his cause.
That said, Sawtelle's Tofu Ya is probably his favorite restaurant right now.  Hopefully it won't come to the same dark fate (knock on wood–it's always crowded, which my father forgives cause it's not unduly loud).  Still, you may want to head over there while you can, if you know what I'm saying. 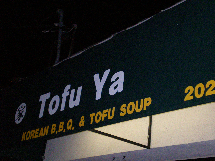 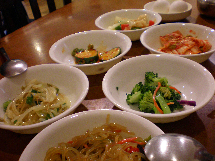 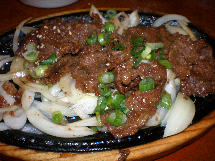 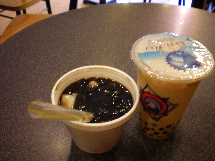 (Tofu Ya Awning, Banchan, Bulgogi and Tea From Volcano Down The Way)
Tofu Ya is famous for their hearty tofu stew, which customers can order with varying levels of spice. T. joined me and my father on this last visit and she has a crazy love for all things spicy (the girl literally carries Tabasco in her purse).  So, she ordered one of the spicier versions, but the waiter eyed her skeptically.  "I can handle it," she promised, as my father and I nodded in assurance.  The waiter looked doubtful.
In fact, T. was totally happy with the spice, although she suspected that he gave her the medium, despite her order.  Either way, the food was inexpensive, tasty and not too heavy.  When I eat Korean food, the "Panchan" (small dishes of kimchi, pickled veggies like broccoli and sprouts, cold noodles and salad that automatically precede the meal) are my FAVORITE part.  You get to sample all these different tangy, spicy, sour and salty flavors, just when you're most ravenous.
I ordered the bulgogi (thinly sliced beef), which is always a favorite (especially at Andrew and my favorite Hollywood Korean BBQ spot, Dong Il Jang).  BTW–I'm dreaming of the day I utter that name and don't think: "The donger need food!"  Anwyay, the bulgogi was tasty over sticky rice and not at all gristly, which is always my fear.
After dinner we headed–past boutiques like Black Market and Giant Robot and other restos like Asahi Ramen–over to Volcano Tea, per my father's tradition.  I was psyched cause they make most of their Boba situations with lactard friendly non-dairy creamer, so I had honey tea with tapioca balls and was happy as a clam (though a bit amped up on caffeine).
Anyway, I plan to head on back as soon as possible.  Or at least before you people descend and my father starts complaining about the crowds.
xo – N.
P.S. Grubtrotters offers another Tofu Stew destination, Beverly Tofu House.  War of the tofus?  Battle of the bean curd?  I just love a good taste test, so that's coming soon!