Wren’s closest friend, her anchor since childhood, is dead. Stewart Beasley. Gone. She can’t quite believe it and she definitely can’t bring herself to google what causes an aneurysm. Instead of weeping or facing reality, Wren has been dreaming up the perfect funeral plans, memorial buffets, and processional songs for everyone from the corner bodega owner to her parents (none of whom show signs of imminent demise).

Stewart was a rising TV star, who—for reasons Wren struggles to understand—often surrounded himself with sycophants, amusing in his life, but intolerable in his death. When his icy mother assigns Wren the task of disseminating his possessions alongside George (Stewart’s maddening, but oddly charming lawyer), she finds herself at the epicenter of a world in which she wants no part, where everyone is competing to own a piece of Stewart’s memory (sometimes literally).

Remembering the boy Stewart was and investigating the man he became, Wren finds herself wondering, did she even know this person who she once considered an extension of herself? Can you ever actually know anyone? How well does she really know herself?

Through laughter and tears, Nora Zelevansky’s Competitive Grieving shines a light on the universal struggle to grieve amidst the noise, to love with a broken heart and to truly know someone who is gone forever.

"Zelevansky's quirky novel is a heartfelt look at a lifelong friendship and the impact of a friend's death, which can also open a door in one's heart to allow others in." — Library Journal

"This important and comedic book shows how hard it is to lament amidst love and life." — "12 Books About Grief," SheReads

"Competitive Grieving...takes an honest look at the universal struggle to tune out the noise and grieve." — The Nerd Daily

"Thought-provoking and introspective, Zelevansky's witty and stylish novel is the perfect summer page-turner for the beach, the barbeque or the backyard." — "Love, Loss and a Great Read," Rona Berg, Organic Spa Magazine

"Nora Zelevansky's Competitive Grieving is equal parts romantic, thoughtful, and truly moving—as well as being a lively and sincerely funny exploration of how well two people can ever truly know each other. You will hug your friends a little lighter after reading it." — Heather Cocks and Jessica Morgan, bestselling authors of The Royal We and The Heir Affair

"Darkly funny and deeply moving, about love, loss and the transformative power of grief." — Caroline Leavitt, New York Times bestselling author of Pictures of You and With or Without You

"With a satisfying blend of warmth and irreverence, Nora Zelevansky explores grief as both a private struggle and a public performance. Several of these characters began to feel like my good friends—the rest, like my enemies. Competitive Grieving is a sharply-observed comedy about the complexity of friendship and the finality of death." — Emily Adrian, author of Everything Here is Under Control and The Second Season

"Is it strange to find a book about loss such a joyous affirmation of what makes life worth the struggle? With her irrepressible wit and warmth, Zelevansky perfectly captures the vortex that follows a shocking loss, while also reminding us that, even on the hardest days, there is always the possibility of finding redemption, forgiveness and even love." — Nicola Kraus, New York Times bestselling author of The Nanny Diaries

"I absolutely loved Nora Zelevansky's Competitive Grieving, a story about life and death, grief and identity, friendship and memory, told with a sharp eye and warm heart." — Gemma Burgess, screenwriter and author of the critically acclaimed series, Brooklyn Girls

10 Things To Tell You podcast with Laura Tremaine

From The Front Porch podcast with Annie B. Jones (*extended podcast conversation available as a bonus) 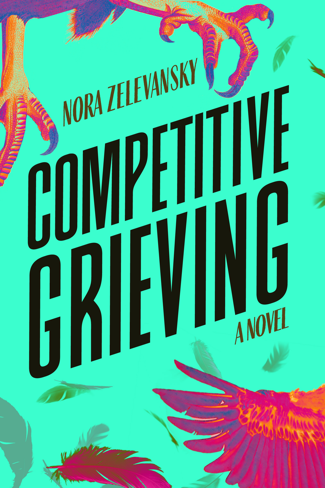