THE LINT COLLECTOR: THE BEST ANTI-CANADIAN TRAINING VIDEO (A.K.A. THE BACHELORETTE) 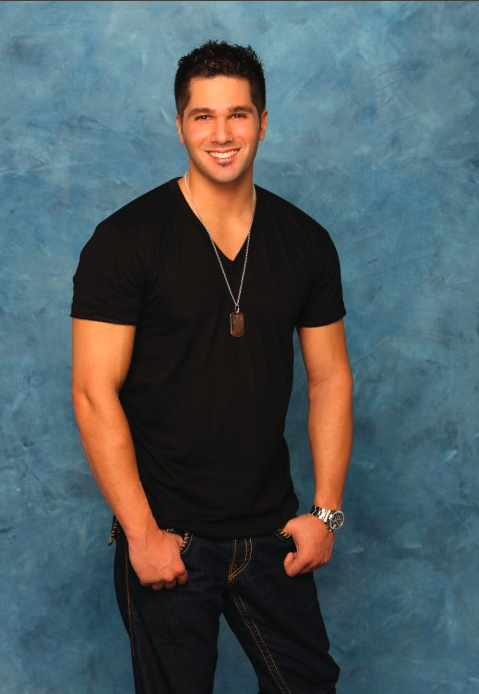 Because, inexplicably, this guy's stitched jeans, annoying smile and douche bag hair (we've not seen so much hair gel since Ross on Friends and he turned his wife into a lesbian) apparently weren't enough to convince Ali to send him home on her own volition (or else The Bachelorette producers asked her to keep him there for "the wrong reasons"–tsk, tsk), Rated "R" finally went home on tonight's episode.

And right before we  got to see him olive oil wrestle.  Poo!  How fun would it have been to watch him talk up his wrestling prowess and then totally get his ass kicked by one of those hardcore Turkish dudes?  Instead, all we got was a really bad joke from Kirk: "His wrestling name should be 'Rated Liar.'"

Kirk's wrestling name should be "Rated Not Funny."

Or "Rated Black Mold."  That's not funny.  Sorry.  He was really sick, I know.  Now I'm like going to get black mold poisoning as karmic punishment.  No, thank you.  I was just kidding, mold gods!

ANYWAY … We also got to watch the other guys try to pin each other.  I dunno.  Personally, I always think wrestling seems a little gay, but that's just me.  Even the outfits leave something to be desired.  Like men in spandex is just not my thing.

Okay, so this episode left me with a few questions:

1. Will Rated R's girlfriend take him back?  I think so.  And, more importantly, are boyfriend blazers officially passe, now that that girl wore one on national television?

2. Am I supposed to feel bad for that chick, even though she was in on the plot for the whole time?

3. Aren't Canadians supposed to be really nice?  What's with all the evil Canadians on this season between Craig "The Hair" (sorry, I don't remember his last initial, but the Craig that went home first) and this Justin Rated R guy?

4. Is Ali's elimination process easily traced in advance from ugliest to hottest?  (I take that back actually cause she sent Jesse home, I guess, but STILL …).  Like, sorry Craig R., but you were by far the least hot left and were thus so obviously going home.  She didn't even French kiss you!  But we rooted for you still.  We knew ye when.  (Don't ask.)

5. Why do the stupid tabloids etc. insist on trying to expose the ending to us in advance?  And why were the "scenes" so obvious???  I'm not even going to reveal what I think I saw in case some of you skipped it, but let's just say I think it's pretty obvious who is going home next.

We'll see if I'm right.  Next week on, The Bachelorette: Blame Canada.