LA (WEHO AND BEYOND): THE BEST SHOE OBSESSION 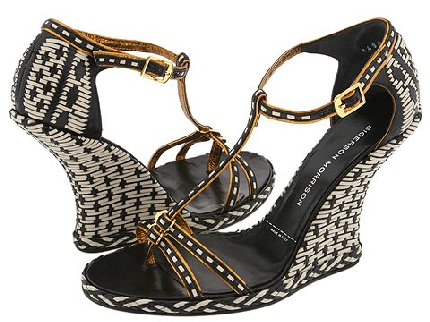 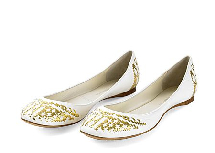 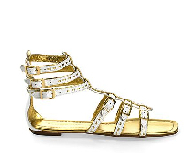 (Sigerson Morrison Shoes . . . Sigh . . . I love these ballet flats the mostest)
I am a Sigerson Morrison whore.  Screw Carrie and her Manolos (although, okay, I'd surely take those too), I am just a sucker for the Sigerson Morrison crossover silvery gold and even, yup, rose gold-hued shoes. I do love me some Louboutins too, but I'm sharing this specific SM love for a few reasons:
1. As with any forbidden love affair, I want to scream from the rooftops (but not in a creepy Tomkat kind of way).
2. There's a Sigerson Morrison boutique right around the corner from my house on Third Street and I noticed that they've started their semi-annual 70%-off sale.  The pain, the pain . . .
3.  If you're anything like me, you can't read another damn story about octuplets, Christian Bale, Chris Brown, Brangelina (just always, right?), "David After Dentist" (which I don't even think is funny BTW–like, disturbing much?) or the fucking economy.
4. If you don't know already, you all should be aware that Sigerson Morrison has a lower price point line called Belle and, while it's not AS fantastic, I did just find a pretty pair of patent flats at starlet-hive Kitson.
4. MOST IMPORTANTLY, it appears that my cat Waldo is a also a Sigerson Morrison obsessive.  No, really, he LOVES putting his paws in SM shoes and I'm pretty sure that–in a cat–this deeply ingrained fashion sense is one of those "miracles" of tiny proportions like a Jesus-shaped potato chip or whatever.
The world deserves to witness the phenomenon for themselves, no? 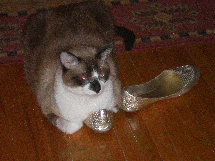 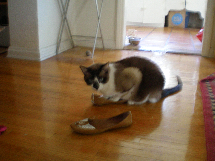 Maybe I've officially lost it.  Or maybe you have.
xo – N.
P.S. Do you have a favorite dreamy shoe line?  Or a pet with a shoe fetish?  Share and share alike!