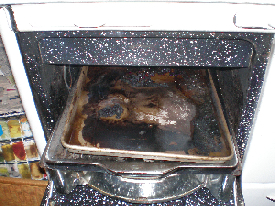 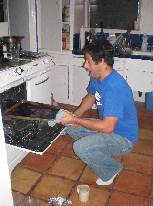 It all started very innocently actually, while my husband Andrew and I were watching Top Chef.  First I should explain that, while I am deeply food obsessed, I have no cooking skills.  And, though he is loathe to admit it, neither really does Andrew. (Andrew, I know you'll argue with me, but, for goodness sake, one skewers class does not a celebrity chef make.)  Anyway, while Chef Andre may have a yummy "special pasta" in his arsenal to go alongside my new sauteed broccoli side (thank you, Tova), we are pretty much lost in the kitchen.
So, we were watching Hosea and Leah make-out (oops) and then cry about it like someone else was responsible (Is this The Real World? But there's no transgendered Mormon bi-sexual dancer!), when we realized that we were desperate for dessert.  Then, as we rummaged sadly through the fridge, Andrew had an inspired idea: Dessert Quick Fire Challenge á la Andre and Nora!
I was onboard immediately and took over the kitchen first, ingeniously combining oatmeal, granola, yogurt, butter, flour, Godiva Hot Milk Chocolate powder, brown sugar, honey and, OKAY FINE I ADMIT IT, a little bit of berry flavored, low-carb Fuze. Oops.  I lumped the concoction onto a baking sheet and slipped the "cookies" into our new countertop brick oven pizza thingy, which was a wedding gift, of course.  I don't know how to use it, but it looks cool.
ANYWAY, in came Andrew and shooed me out.  I could swear almost no time passed.  I heard him bang a few dishes around and complain that the oven wasn't working properly and the next thing I knew flames (yes, actually fire) were shooting from the broiler.  At least we think it's the broiler.
Yes, ladies and gentleman, Andrew put maple syrup, Hershey's syrup, granola, butter and a secret ingredient (which turned out to be Tapatío–I KID YOU NOT) on graham crackers directly on a buttered pan, shoved it into some random part of our oven and, thankfully, thought to check on it when he noticed billows of smoke emerging.
"What was it?" I asked, after he put the sizable fire out, opened windows to let out the heavy smoke and ash filled air (so the piercing shriek of the smoke detector would stop) and stood staring sheepishly at the empty, charred pan.  "Well, I created two preparations," he began to explain in Tom Colicchio-speak.  "Obviously the presentation is shot, but maybe the flavor is still salvageable?"  Yes, Andrew, if you like to eat ash with accents of burned metal baking tray.
Andrew tasted the black muck, wretched and then, like a proper Top Chef who always has a Plan B, he served a dish of grapefruit slices with a brown sugar dipping pile instead.  And, yes, that combination is just as gross as you suspect.  Padma would have definitely pronounced it "inedible," as she shoveled down the rest of the dish anyway.  Gotta have something to puke, right?  Whoops.  Did I say that?  JUST KIDDING.
I didn't start a fire, but my "cookies" came out looking like piles of cat puke baked in the sun.  And they sort of tasted like that too, no matter how hard Andrew tried to fake it.  "I mean, I've had better," he admitted.
It just goes to show you: on Top Chef, the desserts get you every time.
xo – N. 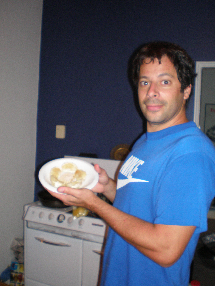 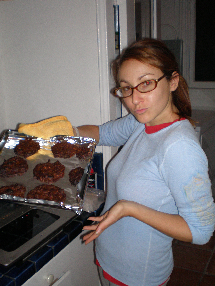 P.S. Only the shorter "Recaplet" is up on Television Without Pity, but the longer one should be up soon and they're usually genius.