LA (AND WAY BEYOND): CRUMPLED TWENTY 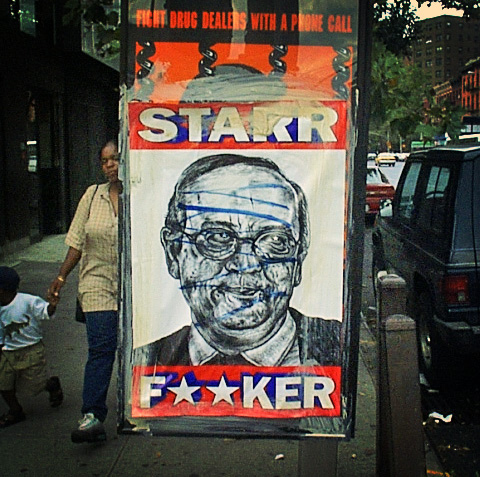 (From Yahoo! Flickr Images)
The Best Link Today:
Ken Starr is like shoulder pads.  Once every decade, he shows up–all ugly and misshapen and full of false righteousness and vibrato–on a mission to destroy something beautiful and progressive in this world.  The issue is always sex-related (not necessarily true with the pads).  And the timing is always when we've won the kingdom back from the ravagers, bigots and self-interested liars. Not to mince words.
Anyway, I'm not even going to venture to understand from where the deep sexual repression that drives this awful person stems, but I will mention that it's always the most fervent anti-gay or "family values" guys who end up caught (literally) with their pants down in a men's bathroom with a call boy (of some immigrant descent, whose rights to live here they, of course, fervently fought against).
Why else would you care so much how other people live their lives without hurting you?  Why else would you be arrogant enough to believe that you should get to dictate how other people create families?
Now, the topic is Prop 8 and gay marriage rights.  It's continually amazing to me that–though historically bigotry against specific groups has been fought and eventually defeated (at least legally)–that, each time a new group of people fights persecution, Starr-types still try to argue that their prejudice is legitimate.  Guess what, guys: this is the same issue again.  This is the same as civil rights. The same as the women's movement.  You can't be anti-gay marriage and not be a homophobe and, inevitably you're going to LOSE.  AGAIN.
Anyway, here's a link to a website, where you can sign a pro-gay marriage petition and also (okay maybe this is a little bad, but . . .) you can also find lists of Prop 8 supporters, who are putting their hard-earned (ahem, tax-evaded) money towards stifling other people's civil rights.  The idea is just not to put more money is these people's pockets.
When Andrew and I got our marriage license last year, it was right after gay marriage was legalized and there were almost all gay couples getting hitched at the Beverly Hills Courthouse.  The only other straight couple looked to be in their seventies, so they were cuter than us too.  Anyway, it was such an amazing and touching piece of history to witness.
I'm really grateful for that experience.
And, just like shoulder pads, I know Ken Starr and his band of merry lynchers will quickly fade back into the abyss too.  Or at least I hope so.
xo – N.
P.S. We live in a country that's supposed to foster different belief systems, even if those other beliefs sometimes make you want to go ballistic.  But, even if you believe that gay marriage is a sin, I think it's important to remember that one set of religious beliefs is not meant to guide the way our country runs.  What you believe is fine (so don't have a gay marriage), but, as soon as you start stealing rights from others, your own rights are in jeopardy.