LA/NYC (AND BEYOND): CRUMPLED TWENTY 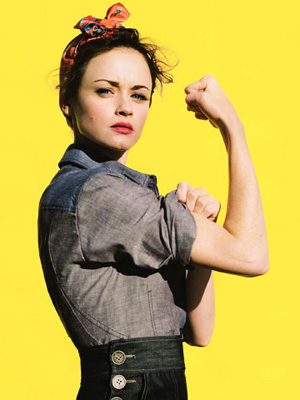 (Photo From Glamour)
The Best Link Today:
This may seem a little pathetic to you naysayers and haters out there, who just don't get it, but I was (and remain) a loyal Gilmore Girls fanatic. Yeah. I said it.  Without (much) shame.  So, when I saw Refinery 29's image of Alexis Bledel as Rosie The Riveter, you know I just had to peek.
Turns out Glamour's 70th Anniversary issue features an "American Icons" spread for which they've dressed up a bunch of young starlets as feminist (or at least prominent) figures in history.  I have a hard time with Hayden Panettierieclothbathrobe.  She just BUGS for some reason (grrrr–it's me, not you), but once I got through an image of her as Amelia Earhart (and a slightly uncomfortable image of Emma Roberts as Audrey Hepburn cause there's like zero resemblance and it sort of makes Emma seem coarse), I was rewarded with images of America Ferrera as Dolores Huerta, Paula Patton as Billie Holiday, Elisha Cuthbert as soccer player Brandi Chastain in the first Women's World Cup and Alicia Keys as Michelle Obama (which I guess is a little odd cause Michelle is so current, but still sweet).  Even The Lohan as Madonna kinda works.  Glamour, more than a lot of other mags, emphasizes women's issues, which is cool.
Side note: Refinery's Pipeline also mentioned that Echo Park's Show Pony is going out of business after this weekend.  So sad, but I guess this is the way of the moment.  Worth stopping by, I'm sure:)
Now, I'm going to watch old Felicity, My So-Called Life and Gilmore Girls episodes and sulk.  Toodles.
xo – n.
P.S. Isn't the Internet great?  Now I know there are other lunatics like me, who actually created some of these sites.  YAY us!!!!
P.P.S.  What's your favorite canceled show??