LA (VENICE): THE BEST BBQ TO SOP UP THE BEER 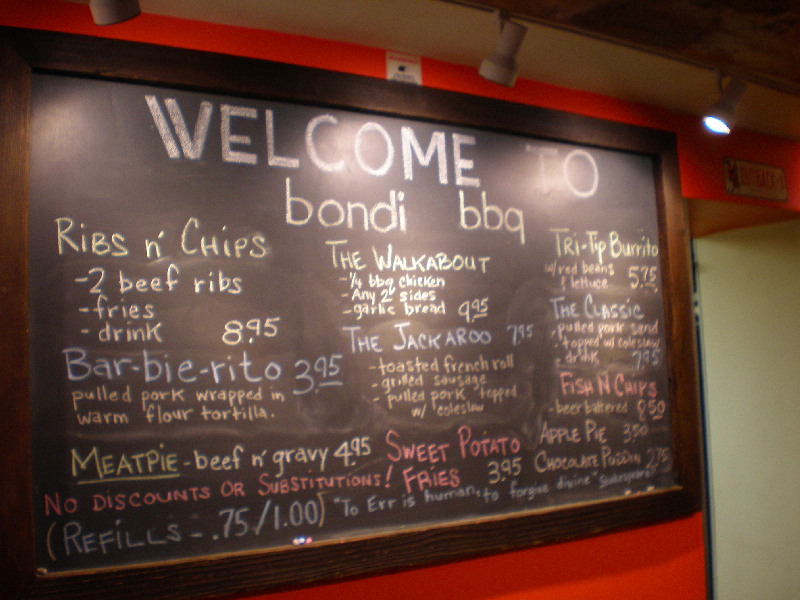 If you ever wondered what "Australian-style BBQ" actually means, I'm here to tell you it doesn't ACTUALLY have much to do with throwing another shrimp on the barbi.  This Saturday was R.'s bday party,  which (falling at the same time of year annually like birthdays sorta do) always feels to me like the beginning of summer.  So, it was appropriate that said celebration went down in Venice.  California, that is.

The day started off overcast, but (especially after a few massive Hefeweizens) I was seriously psyched and having the best time I'd had in months.  The day was so good, in fact, that I found myself stripping off my stockings and then redressing right on the beach.

That doesn't really sound like proof of fun, come to think of it.  Eh, long story.  But the point is that the party was great.  (Actually, the point is that one should never wear stockings to Venice Beach, but I digress).

ANYWAY, when it got a little chilly, we decided to move the festivities to The Townhouse on Windward and, when my friend A.L. and I lagged behind to peruse cheap sunglasses, we came upon Bondi BBQ.

It must have been fate.  A.L. knows one of the owners or investors and had been wanting to try the spot and they offered to deliver whatever food we ordered to the bar next door, where the rest of our group had landed.  I mean.  It was a no-brainer.  We had to try something.

And we had to go big or go, ahem, well just go, so we ordered off the specials board (which lists eats you might not find on their Aussie BBQ menu, but are regularly available).  After about .2 seconds of consideration, we opted for the Jackaroo Sandwich, which is pulled pork, grilled sausage and coleslaw on a french roll.  I'm sorta of dying just thinking about it.

To be honest, sometimes I get weird about mixing meat.  Like, and I know some of you will think this is sacrilege, I actually don't really like a bacon cheeseburger or a bacon wrapped shrimp.  (Did you just stop reading?  I'm sorry!  I'm sorry!)  Just one type of meat at a time is ideal, I think.  STILL . . . the Jackaroo sounded to amazing to pass up.

And it was SERIOUSLY TO. DIE. FOR.  I wish I had a picture to show you, but I was hungry and tipsy and surrounded by like ten other hungry and tipsy friends, so you can imagine how long the sandwich actually lasted before total obliteration.  But you'll have to just take my word for it.  And also take this into account: at Bondi BBQ they dry rub the meat, cook it in a convection oven, then throw it on the grill with BBQ sauce.  YUM.

Right now, it's 24-hours later and I'm sitting on my couch wishing that I had my very own Jackaroo to scarf.  Poor Linty.  Sad, sad story.