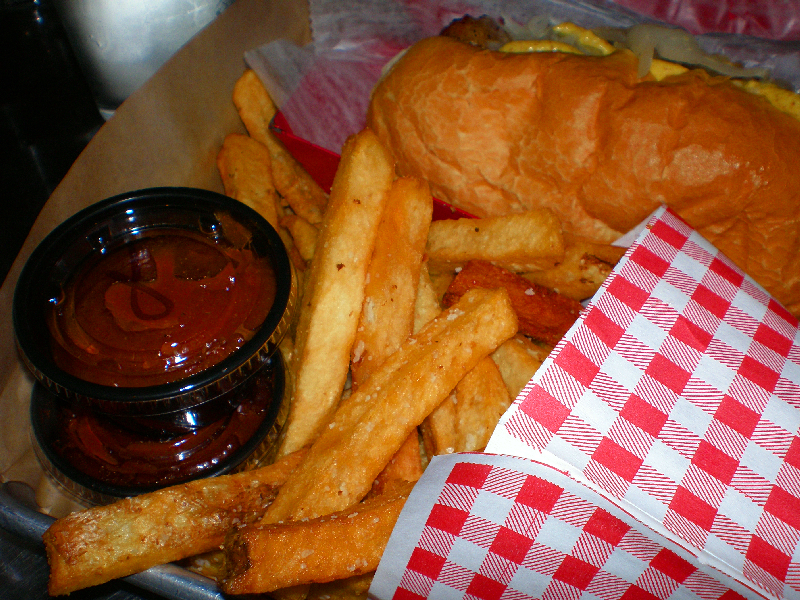 This time, I'm late to the game.  Mostly because I couldn't pronounce Wurstküche well enough to suggest eating there.  But, after snagging a Philip Lim sweater that I majorly heart at the Barneys Warehouse sale this weekend, I finally made it over to the Downtown sausage spot you all love so much.

First of all, while M. & P. go all the time on weekdays and it's not that nuts, this spot is a scene on weekend nights, for sho.  We found a little side table that made me quite happy, but the communal tables were pretty much filled.  Some dude actually came up to me, while I was waiting for the peeps, and asked me to take his picture and then asked, "Are you an artist?"  I thought that was funny cause it's so clearly like an east side indie scene that probably that's not a totally random question.  Unless maybe he just really loved my picture and thought, "Only an artist could do this amazing a job!"  Huh.  I just thought of that.  I think I'll choose to believe that scenario instead.  I'm so talented.

Anyway, secondly, I didn't realize somehow that their thing was "exotic sausage," which sounds really dirty like "exotic dancer" or, well, like Wurstküche pronounced phonetically.  (Worst cooch?  Worst coch?) But, yeah, they have all these crazy types of sausage from rattlesnake to alligator to duck with bacon to veggie options.  I felt kinda rushed for some reason, so I ordered a good ole' bratwurst with sauerkraut to go with a glass of Chimay, which was delish, but traditional.

But the Belgian french fries came with dipping sauce options (an offering I ALWAYS appreciate), so I had the curry ketchup and the Sassy BBQ sauce, which was just way above par (and I am OBSESSED with BBQ sauce, so that's saying something).  Andre The Giant had a jalapeno and mango sausage sitch that was really exceptional, he says.

Next time I'll try something crazier like the Buffalo with Chipotle Peppers or something (maybe).  Even though I refuse to call it "exotic" cause it skeeves me out.  Je refuse, I tell you.  Je refuse!