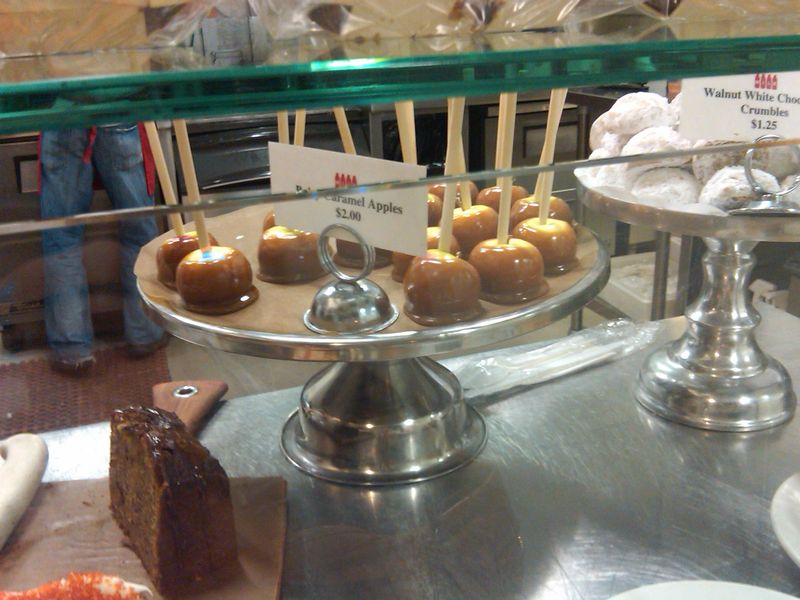 Not to get all cultural on your asses, but, for the Jewish New Year, one generally eats apples and honey to represent the sweetness of the coming year.  Of course, I like this tradition because, well, it involves food.  But I also like the simple symbolism of the thing.

Since the more widely accepted New Year just passed (Widely accepted? Christian? American? Western Civilization's?  I have no idea what to call it, but you catch my drift), I thought it would be nice to start off with this slightly tastier interpretation of apples and honey.  Namely, at Milk on Beverly, the caramel crab apples, which are just as adorable as they are a brilliant culinary invention!

They're all autumnal too.  See?  And people say LA has no seasons.  Why?  Just because it's like 80 degrees and sunny in January?  It gets downright (a little) chilly at night.  Really it does.  I have to wear a cotton sweater with my flip-flops.

P.S. In the interest of full disclosure, I should admit that I DID also have to lodge a complaint while at Milk: They actually discontinued my favorite strawberry sorbet and Parisian macaroon ice cream sandwiches (called "Lady Bugs," I think).  I filled that comment card right up.  Yup.  I'm THAT girl.