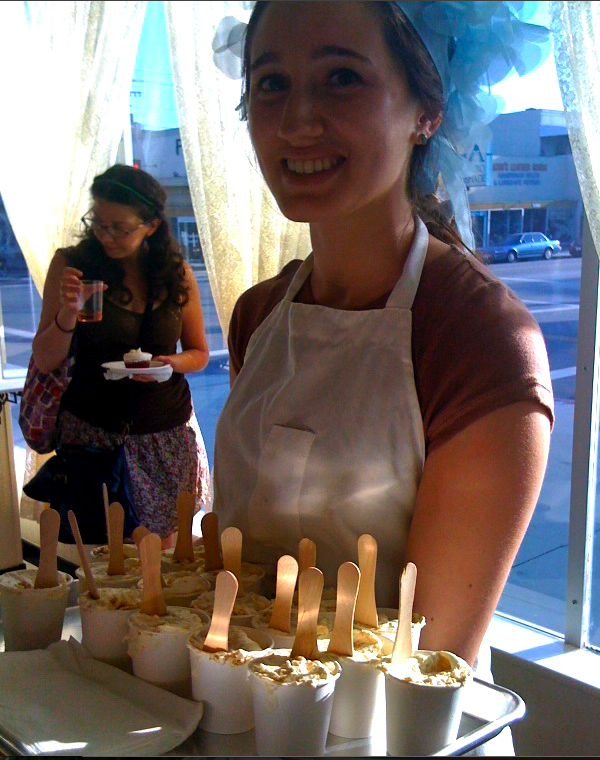 You know how people who love the British version of The Office always hate the American one?  "True" fans, they claim, wouldn't watch that U.S. drivel.  (I love that U.S. drivel BTW.)

It's sort of the same principle about "true fans" of a given band, who inevitably argue that the lesser-known songs are far superior.  (I say, play me Thunder Road again!)

In the biggest news for Sex and the City fans since the second movie came out and everyone had a cow about how unsubstantial it was (even though it's SEX AND THE CITY, not War & Peace: Manage those insane expectations, people!), the NYC staple bakery made famous by the show has opened their L.A. annex.

And, sure enough, before M. & I headed to the friends & family opening party on Friday evening, we both got strict instructions from "true Magnolia devotees" to try the banana pudding.  The cupcakes are the famous thing, but the banana pudding will blow your mind (see trays of the stuff above), they said.  I have to say, it didn't disappoint, although I was limited to just a wee bite thanks to my lactard issues.

The party was like a sugar-high fantasy, where basically you walk up and ask to try any items behind the counter from cupcakes of all colors and flavors to whoopee cakes, cookies and bars.  I tasted a lemon bar (so tart and good!), double chocolate fudge and a "Magic" bar with coconut, while M. sipped rosé and ate a cheerful yellow cupcake.  The oatmeal cookie was ridiculous too.  (See pics of some treats and the space below.)

Other neighborhood types, friends, family and press milled about the very spacious and bright digs. Abrams has been making the rounds to nearby businesses and bringing treats to boot (a good way to ingratiate yourself in the 'hood, I say) and everyone is duly happy to see him arrive.

Between holding friend's babies and quipping jokes, Abrams also mentioned that, while they won't be selling cooked foods like eggs or really anything savory at all, "We do have over 40 products."  In other words, it's not ONLY about the cupcakes here, lest Joan's on Third and Toast start worrying for their respective bakeries.  In fact, Magnolia will have lots of muffins and coffee cakes too for the breakfast crowd (a.k.a. Andre "Can't Pass Up a Sweet" Vien).

That said, when I remarked to Abrams that I loved the lemon bar, he enthused with wide eyes, "You should try the lemon cupcakes.  They're stuffed with lemon in the middle!"

I should indeed.  Maybe I can make that the new "true devotee" Magnolia L.A. food of choice; the lesser known song on their album, if you will. 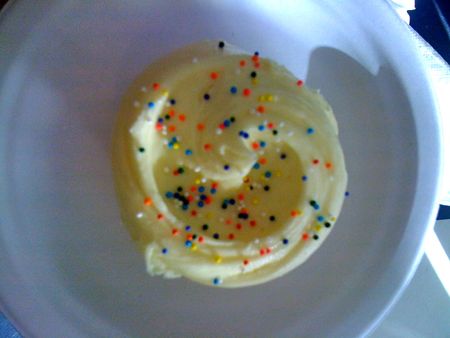 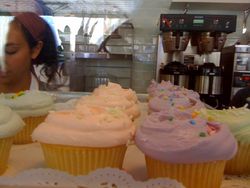 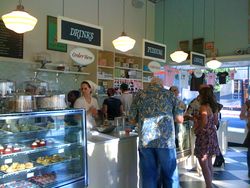 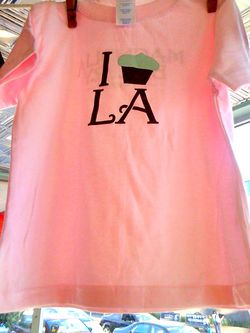 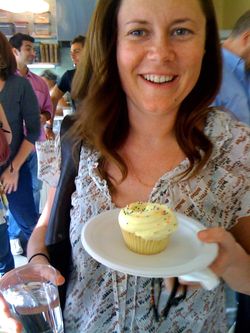