THE LINT COLLECTOR (A.K.A. “Trasy Tuesdays”): THE BEST LITTLE “FAME WHORE” HOUSE IN LA (PLUS A CLOSET CASE?) 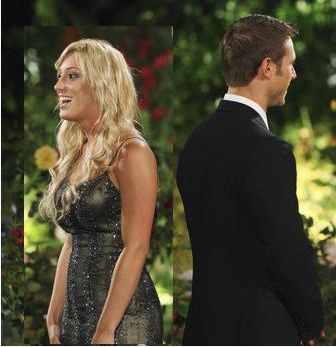 I just want to say that I am SHOCKED, yes SHOCKED, that Vienna and Jake didn't find true love.  I mean, who knew that she was trashy and he was without genitals?

Oh yeah.  Every living person on earth knew.  I mean even my cats rolled their eyes, when he chose her.  He clearly only picked her because he is an insecure weirdo, who feels easily emasculated, and he wanted to prove that NO ONE–not even the other women on the show who told him repeatedly that she was a nightmare–was going to impact his decision.  He's a MAN, people.  He makes decisions for himself.

Well, I mean, at least when his publicist isn't available.

To be fair, maybe he picked Vienna cause she kind of looks like a man in a dress.  Well, like a male turtle, at least.  And I think maybe he likes men.  Maybe he wasn't jealous that Vienna was hanging out with another boy, but that he wasn't.  Sorry, Jake.  I'm pretty sure no matter whether Vienna emasculates you by using a GPS or not, you'll still have those strange feelings towards other men that make you feel so ashamed.  As a wise Skittles ad executive once said, Jake, "Taste the rainbow!"  Maybe then you won't be so uptight.

Anyway, Jake (and his PUBLICIST) just couldn't BELIEVE that Vienna would sell him out to a "magazine for payment!"  I mean, thus far they had both proved themselves to be so disinterested in whoring themselves out for cash, so I can see where he got confused.  After all, The Bachelorette is SO not fame whore territory.

Maybe he was too busy twirling his pilot ass around Dancing with the Stars to notice that, oh, he too had "sold out."  Anyway, Vienna wants a "poly-a-graph" test because she's "not an idiot."  Okay, Vienna.

Also, love him though I might, I am just going to go ahead and say that Chris Harrison is not a primo marriage counselor.  Agreed?  Stick to blogging, Chris!  Still, the whole country said "Amen!" when he stopped Vienna and Jake mid-argument and said, "We don't really care about the dog."

Apparently, Jake loves his Twitter more than Vienna and Vienna's friends in Florida (a.k.a. the gators, toothless gas station attendants and swamp things) all turned their backs on her.  She's psycho and I think (after hearing him call her "baby" and talk constantly about "undermining") that he is officially a bully.

Also, did you know "there is more to a relationship than sex and intimacy," according to Jake?  Like condescending to and controlling someone, for instance?  Right?  Right?

About this week (if you haven't watched it yet, this is a SPOILER ALERT): This week on THIS season's Bachelorette, Ty went home.  YAY!  I guess they made it look like he went home in Tahiti in those scenes, but then it wasn't. SO SO glad.  Bye bye, Ty!  Go back to bumble-fuck wherever and cope with the fact that women work because it's 2010.

Also, not to freak you out, but we have a half black president.  It's okay, Ty.  Just deep breathe.  It's all gonna be okay.  When you feel better, I'll introduce you to something called an iPhone.  Craaaaaazy.