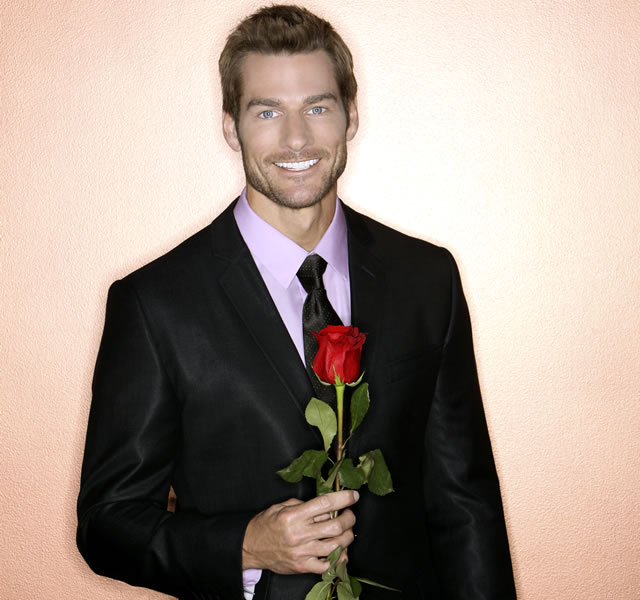 [Supposedly, this is NOT a statue from Madame Tussaud's Wax Museum, but I think anyone with eyes would say different.  Blink, wax Brad!  Blink!  I dare you!]

Oh, jeez.  Where to begin?  I guess at the beginning: The season premiere of The Bachelor is always momentous and this year is particularly significant as this is the first season where an old failed bachelor returns to try to fall in love … again.

And, doing us proud as always, the show manages – within the first three minutes – to set at least the psychiatric world back a good millenium or so.  Apparently patient/doctor confidentiality must be waved if you want to find love … again.  Seriously, how did they find a therapist with so little integrity?

Just kidding.  I'm sure that therapist is totally there "for the right reasons."

But before that, Chris Harrison opens up with, "This is already one of the most shocking seasons ever!"  Already?

Flash back to three years ago, when Brad first rejected DeAnna.  Some people were mad at Brad about that, but I sort of enjoyed that moment.  Not because I'm evil (mostly), but because I loved his panic attack.  It was so REAL!  He fully flipped out on national TV.  But why do I think I am going to see this flashback about 450 more times over the next three months until I am able to reenact it with my cats?

I started watching The Bachelor religiously during Brad's first season though, so I am partial to him, I have to admit.

Anyway, it turns out that Brad blames himself for his indecision on his last Bachelor season.  And his dad.  Who wasn't around.  Poor Brad!  (Kudos, producers.  I already feel bad for the guy!)

Then Brad's therapist advises us that he's open to finding love.  Presumably, this "doctor" thinks that going on a reality show is a FABULOUS solution for someone who is afraid of commitment, has panic attacks and already humiliated himself once.

Brad agrees.  At least, he seems to agree, if that's what shirtless push-ups mean.

Then we meet the women.  Apparently, the producers have decided to torture Brad with some sadistic chicks from funeral directors to dentists to men's waxers and vampires.  Has nobody seen Little Shop of Horrors?  This could end badly.

The other women are all mourning someone and, christ, now I'm crying too cause blonde Emily's race car driver husband died and then she found out she was pregnant.  These sad stories should keep the ladies on for at least a few episodes.  (Plus, they happen to be among the prettier ladies).  Please tell me that – no matter what – I will never see Emily on Bachelor Pad, sleeping in a bunk bed above Wes.  I need to believe she's not gross.

Meanwhile, why do the girls in the limo keep stressing that the bachelor's identity is "a mystery."  Isn't he always?  It's making me think they actually do know in advance.  I have a theory that the women vote on thier top three picks maybe.

And, wait, wait, here's DeAnna and Jenny (Jinny?), who want apologies after seven hundred years because Brad rejected them.  But wasn't it normal for him to reject Jinny because he chose DeAnna (even though he ultimately bailed)?  And isn't DeAnna engaged to a twin of some ex-contestant?

OMG!  They're grilling him (cause after 3 years of no contact, they totally know all about him and his life).  Brad is fucking with his tie again.  I think he's going to have another panic attack.  Is he sweating?  Visions of the finale of his last season!  He says that he is shaking!  Someone get this poor sap a Clonopin!  Give him a hug or something!!!  He looks like he's freaking out.  What kind of hack therapist let this guy go on this show????  I think he's going to need to be institutionalized after this.  I am so stressed out.

Anyway, now Brad meets the girls and all I can think is, "Which of these girls is going to get wasted and humiliate herself?"  But sadly none.  Fang girl comes closest.  Why are all the women dressed for the prom?

Okay, now I am feeling protective of this guy.  Even The Drewser says he feels bad for Brad (there's a man's perspective for you).  They're all smakcing him and bitching at him!  Finally, one woman won't hate on him, she says.  She is like Tenley's doppleganger.  Ugh and the next girls' red shoes make me want to cry.  My eyes!  My eyes!  What are they doing to this dude?

Then a caption says that the vampire girl is a "model"?  For what?  Strait jackets?

There's also a Rockette on speed named Keltie.  Keltie?  Her parents couldn't choose between Kelly and Katie?  So many of these women look like men in drag.

Hey, something just occurred to me.  Do you think Brad literally couldn't get a date anymore after the show's debacle and he HAD to go back on TV, just to get laid?  Maybe his bar is in trouble and he needs publicity?

ANYWAY, as Chris Harrison says, "Brad, you got some splainin' to do!"  Well, maybe Chris didn't say exactly that.  But off to the cocktail party and rose ceremony.

I'm wondering at first if Brad is going to become that guy who leads off every conversation with "Well, my therapist says …"

But, then, the women keep bringing his past up. Is it me?  Or is it a little presumptuous to have this whole conversation about commitment when like 10 women are getting sent home in a couple hours?  Like, why would any guy want to keep all these pains in the ass around?  Send them all home, Brad!

FINALLY, some girl with a damn brain – Ashley S. – decides to let him off the hook.  Guess who is NOT going home tonight?  DUH.

And, then, my favorite quote of the night comes from a sad girl in a blue dress, who keeps getting her time usurped: "I have a great sense of humor.  As you can see, I'm not wearing shoes."

Then, it's the rose ceremony.  One girl cries that she gave 110 percent.  To what, no one knows.  The last three hours?  Curling her hair?  Ten teary girls go home, as Brad stuck with the relative hotties per usual, and we're off to another season of The Bachelor.

Now, if only "Keltie" would change her name.  Maybe I could stop gagging.