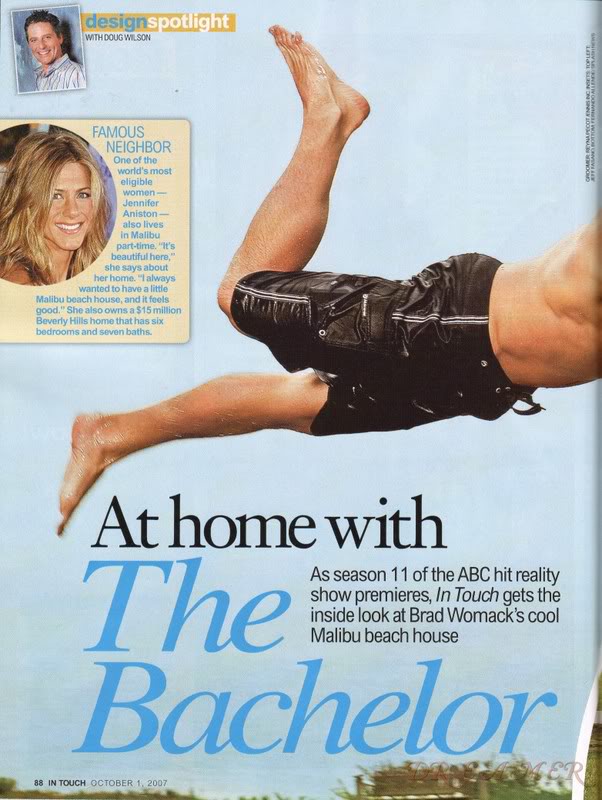 I'm confused.  Is it just me or does it seem like Emily and Brad have NOTHING to say to each other?  And yet they're supposedly super into each other?  Are the producers editing actual conversations out?  Do they like each other so much that they feel comfortable being silent?  Is it just that Brad feels the thrill of the chase with her?  Am I trying to analyze a relationship between two people who are practically brain dead?

Anyway, Brad actually admitted to liking Emily more than he "should" and then told her in advance of the ceremony that he's giving her a rose.  CRAZY!!!!!  Brad totally broke the rules.  He's hardcore.  He's so Ali during her last episode, when she told Chris they would just skip their date.

Enter funeral director, Shawntel: Who cares about her?  Where is her $5,000 bag?  Why is she in a stretched out white tank top?

Speaking of real, I think Shawntel may have a bit of a caboose under that sarong.  Shawntel says she's falling in love with Brad and he feels like he can really open up to her about his dead beatdad, but the most exciting thing about the date for me is that they attend a concert and there's actually other people there!  No awkward two person performance with bad slow dancing!  Uh oh, but there is a sequined bikini and a midnight dip in the ocean.

Personally, I don't believe in swimming in the ocean in the dark.  Creeeepy.  Who knows what's swimming below you.  Or near you.   Could be a shark or an eel or, ew, a Bachelor contestant (shudder).

Britt date time.  Booooooooooooooring.  Why is she so anorexi too?  Someone give that girl a milkshake or something.  Wait–Isn't she a FOOD writer?  She does have a lot of teeth.

And here comes the quote of the day from Michelle: "Britt & Brad.  It sounds cute, but not only can I not imagine them together, but I can't even imagine him friending her on Facebook."

Michelle has some weird stuff going on with her shoulder and her cheek.  Bad skin?  More mysterious bruises?  Maybe she's like a cutter, but instead of cutting, she throws herself into walls or something.  Maybe her other personalities beat her up.

Britt says terror is her normal "go-to" feeling.  Well, that sounds like a blast.  This is so Sarah Marshall.  She needs to jump off a cliff into the water and she's terrified, as he waits below.  But no frenching when she does it.  Hmm.  Bad sign, as if we all don't know she's going home anyway.

There's more, but let's not waste time.  Peace out, Britt.  Everytime Brad tries to break up with these girls, they think he's professing love and then they start to do it first.  Awwwwkward.  She's even trying to argue him out of it–eeek.  Can we please move on?

The group date is a Sports Illustrated Swimsuit Issue shoot and I'm sort of loving Ashley, who is dancing around singing, "No boobs!  No boobs!" about herself.  Chantal feels like a fat cow, but apparently she likes baring her udders.  Michelle won't do topless (despite her chest being as fake as, well, Chantal's), but she will basically have sex with Brad on film.

Ruh roh.  Brad went too far and he knows that the pool party is going to be "Let's talk city."  Poooor Bradley Pooper.  (That's his Garbage Pail Kid name.)  Brad thinks all his conversations with Michelle are deep, but he's scared that they're too much alike.  Wow.  I can't think of anything less true.  But he does call her "volatile" and that's right on at least.

He gives Ashley the rose and then Chantal cries and I actually sort of feel for her.  Except that Brad has a weird leathery neck and weird veins on his chest muscles and I'm like, ew.  Maybe you should all find someone else.

Brad is like John McCain – a maverick – and he cancels the cocktail party.  Also, he keeps enduring torture, albeit a different kind inflicted by naggy girls.

"Something is amiss," the girls feel.  And finally this shit is getting good cause any of these girls could really go farther, though Michelle feels that she's going home.  Maybe Brad should pick based on location.  Like who really wants to go to Chico, CA, so maybe nix Shawntel?

But it's [**spoiler alert!] Michelle who goes home.  Which is INSANE.  Brad!  Dude.  I'm a girl and even I know that there was no point in keeping Michelle around THIS long, if you weren't even going to get to the fantasy suite with her.  Oh well.  He's dumber than a cockerspaniel.  And she won't talk (which kinda makes me like her).