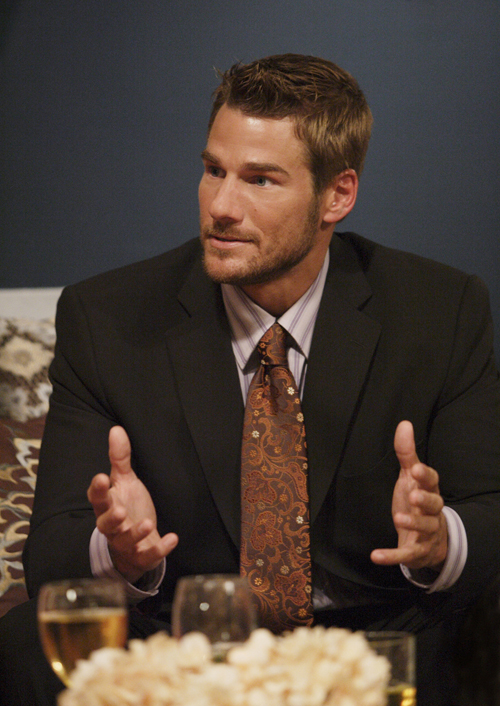 Ah, yet another tasteful episode of The Bachelor.  Do you think the producers are just a little worried that they're going to hell?  Just wondering.

Anyway, on this episode, we're off with Brad and the girls to Vegas, where they're staying at "the nicest hotel EVER!"  Now, I've stayed at The Aria in Vegas and, sure, it's nice.  But I'm going to go out on a limb and say that the nicest hotel EVER probably doesn't have a casino in the lobby.  Much as I love the Party Poker and Wheel of Fortune slot machines.

Brad is excited to "clear his head" in Vegas.  Okay, Brad.  Maybe you've never been to Vegas before, but it's not exactly where you get clarity.  This is where you get hookers.

He takes Shawntel the "funeral director" on the first date and I won't even get started again on the spelling of her name, but he says that "She lights up everytime I see her!"  That's funny cause I'm pretty sure he meant it the other way around, but what he said it actually probably the truth.

Anyway, I'll light up too for shopping spree.  WTF?  I would claw her eyes out if I was one of the other girls and she came home with all that stuff.  Hell, I want a $5,000 bag!  Michelle is going to murder Shawntel in her sleep.  Psycho killer qu'est-ce que c'est … Meanwhile, this is the world's most unrealistic date.  Give him two months and he'll start rolling his eyes and stuff at the smallest mention of shopping.  Pallleeeese.

At night, Brad takes her on the roof of the hotel and she says, "OMG.  Are we like on a roof or something?"  I don't know, Shawntel.  You see the sky.  What's the other option?

Brad it turns out is squeamish about embalming dead bodies.  Who knew?  We learn about Brad every day.  There are fireworks and The Drewser is upset that they aren't dancing awkwardly to a private concert by Hootie and The Blowfish.

You guys, I'm on so much cold medicine (yes, again, judgy mofos).  I'm gonna go ahead and just list my favorite moments:

1. When the producers decided to send Emily into a spiral about her dead race car driver boyfriend. (OMG producers – burning fires of hell, anyone?)  Where is Brad's shrink when you need him?

2. When Chantal O. said, "It's hard to feel like you're not some creepy person watching Brad and Emily on a date."

3. When Elvis rolled over in his grave and wished he had done MORE drugs in his lifetime to numb the horror of Ashley S., Ashley H. and Brad performing dance numbers to his songs. (I have to put out there that I've actually already had to sit through this particular Cirque du Soleil show.  This doesn't seem fair to me to have to do it again.)

4. When Brad delivered heart felt speeches to both Ashleys about their future on the show and had to start both with, "Ashley."

5. OMG.  The "Are You Lonesome Tonight" montage as Ashley S. leaves in the limo after sobbing.  Poor Ashley!

7. When Marissa (who I have never seen before, I think) gave Brad notes as if it was the first episode of the season.  Why is she orange like an Oompa Loompa?

8. Michelle treating Brad like a dog and him liking it.  What is it with men and crazy girls?  Is anyone else afraid he might actually PICK her a la Jake and Vienna?

9.  UM.  This is one that I DON'T like.  What is the the loaded reveal at the end?  I totally didn't watch the "Scenes" cause I don't want a sneak peek!