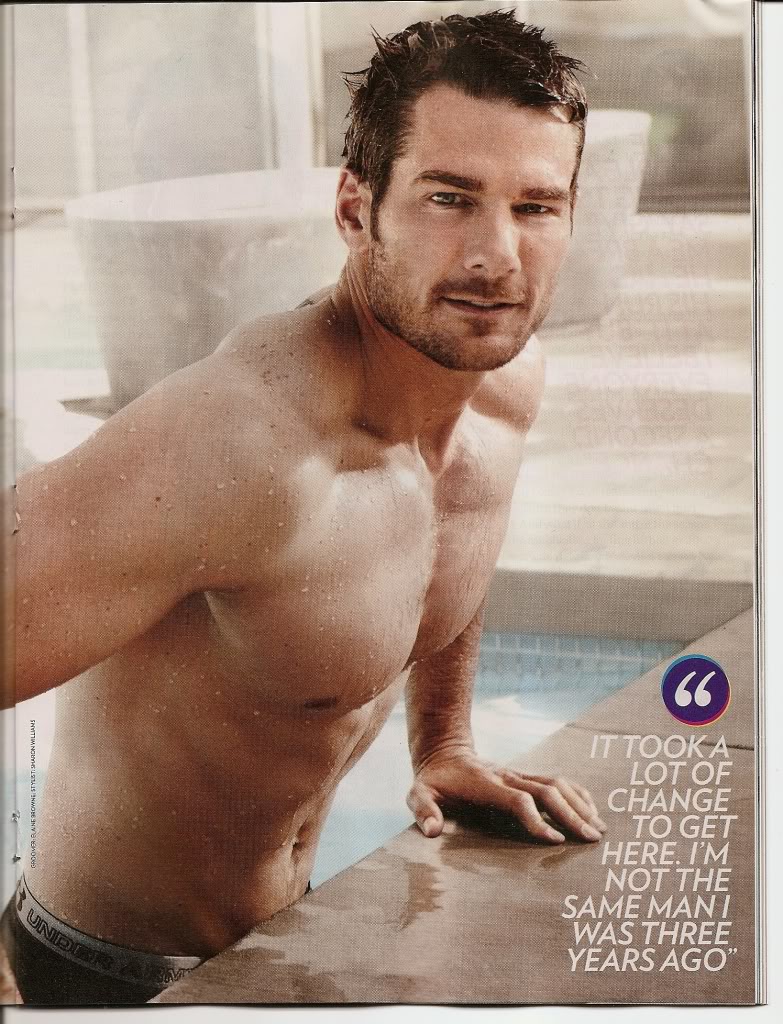 Brad starts off this episode with a pained expression because he's "been thinking a lot."  Maybe about whether or not he can pull of a Kangol hat.

Nope.  The answer is no, Brad.

But after a montage about the girls, we see him leaving the building with a leather duffel in hand, that damn hat and a black t-shirt like he's about to rob a bank in Oceans 16 or something.

I think maybe this show is depressing me.  I can't stop eating cheese, while I watch.

BUT anyway, Brad meets Chantal O.'s parents in what C. described aptly as a "McMansion."  Chantal comes from mo' money, mo' money, mo' money, mo.  And her mother seems to have gotten her lips, boobs and, well, entire face "touched up" pre-filming.  In fact, no one in the family seems to be able to form a facial expression.  Botox much?

Anyway, Chantal's mom is a good barometer for what Chantal will look like in 30 years (assuming she uses the same plastic surgeon).  So, Brad and Chantal's dad are both "self-made" men and for a second I feel like they're competing over who had a rougher childhood and a worse dad.  Ultimately, I think her dad likes Brad, but I can't tell cause his forehead doesn't move.

Her mom gives sage advice, which basically consists of nodding absently.  She's either moved by Chantal's feelings or she thinks Chantal should get a grip, but again I can't tell because her face is FROZEN in a single position.

Next up, Ashley's hometown in Maine:  "This is where I grew up," she explains.  Yes, Ashley.  That's what "hometown" usually means.  She takes him to where she first worked as a kid: "Isn't that cute, Brad?  I like worked in a bar!"  Yeah, cute is totally the word that comes to mind when I think about a child working in a bar.

Brad is asked a question in French and responds, "Si."  Then, they're served a regional specialty, which I'm pretty sure is just chili cheese fries.  Maybe the people in that town need to get out more and see that chili fries have actually made it outside of Maine.

Brad is worried that Ashley feels "disconnected" and stresses the importance of things being "great" instead of "good."  They get apples and carrots via a fruit stand with an honor system blah blah blah.  Ashley feels so proud bringing Brad into her house and I find that interesting because the word that comes to my mind when I imagine bringing home a guy I'm dating (who is also screwing a bunch of other girls) is more like shame.

Ashley's fam is apparently a turn on because she keeps like straddling him in front of her parents.  Apparently, she is really ambitious and driven.  She's going to be a dentist.  Wait, what?  Have we heard word one about this before??  Brad isn't sure he can keep up with Ashley's big dreams … to be a dentist?  Meanwhile, her family is like pimping her out, trying to coerce him into sleeping with her.  Apparently, small town people are weeeeeeird.  Too many chili fries.

So far, Brad's told two girls that he'll miss them and I haven't really believed him so much.  Say it again, Brad!  With gusto!  Is it just me or is this dude stressing HARD?

Shawntel welcomes Brad to the funeral home.  I'm sorry.  Is this girl a plant?  She can't possibly be for real.  And we thought the fang girl was creepy.  Brad looks like he is FREAKING out.  Where the hell is his therapist now, mofo?

After making him play corpse, Brad meets Shawntel's family and it seems obvious that his heart isn't it.  He has this pained smile on his face the whole time that screams "When can I escape?"

(Meanwhile, someone PLEASE take this cheese away from me.  I seriously can't stop stuffing my face.)

Turns out Shawntel is being groomed to takeover the family funeral business, which means staying in Chico, California instead of Austin.  She breaks the news that she might move, if she marries Brad.  Um.  Maybe wait to break your parents' hearts until you know you're actually in a relationship.

OMG.  Suddenly I feel AWFUL for Shawntel.  Her father gives her the worst guilt trip in the world, talking about how she missed a local tragedy and disappointed people by being away when they needed her in their time of mourning.  Um.  Daddy is a jerko.  AWWWWWWKward.

Brad says that she has an amazing family.  I just almost typed "fantasy."  Shawntel says the day couldn't have gone better.  REALLY?  What is your family usually like, if that's them on a good day?

Now comes Emily and I don't care what happens cause I'm just primed for a teary reunion with her daughter (visions of Jason Mesnik and Ty).  Poor Brad.  Emily's daughter hasn't seen her in like six weeks or something.  You think she wants to meet some meathead dude and a bunch of camera guys?  At least he brought a present, but he has no idea how to talk to a kid.  They're all just staring at each other.  But a butterfly kite saves the day, at least for the moment.

Brad decides to give Emily a hug goodbye instead of a kiss.  She clearly thinks he's freaking out about the whole kid thing and she may be right.  Stupid, Brad.  What woman wants to feel like you met her kid and now you no longer find her attractive enough to kiss?

This is my favorite thing about him, going back to last season.  When he panics, he literally has no poker face AT ALL.  He is like stumbling around, bright red and awkward, fumbling for her front door.  These guys all say they're ready for a woman with a kid, but the reality is a bit different than the idea.

But again gotta love Emily.  Brad says, "You're not buying this, are you?" and goes on about how her daughter is sleeping upstairs and he doesn't want to be disrespectful.   And Emily is just bluntly honest: "Brad, if this thing happens between us, she's always gonna be upstairs."  Deal or get lost, buddy boy. They make out in the doorway and he is probably just wondering when he can leave and call his shrink.  Maybe he should give his therapist a rose instead?

Do we think Emily's going to be the next Bachelorette?  Or is Brad going to pick her?

This is a digression, but I feel like Chris Harrison hasn't been in this season that much.  Maybe the therapist kinda stole his thunder?

Anyway, at the rose ceremony the women are all wearing the ugliest prom dresses I have ever seen, especially Chantal O., who looks like a shlumpy cougar with an updo and a red satin monstrosity.

Ultimately though, Shawntel goes home, which couldn't have been more obvious from the scenes the week before.  Good thing she created a weird rift with her dad over nothing.  Brad creeps me out a little when he touches her bare knee.  You just dumped her, dude!

But it's bye bye, miss American funeral.  And on to the fantasy suites …