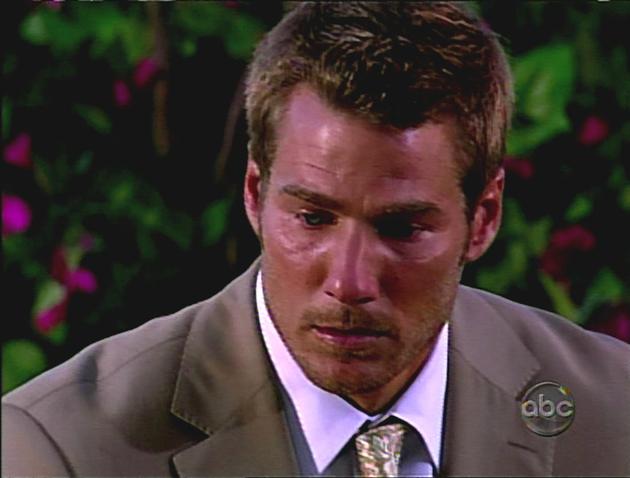 This week's fantasy date episode takes place in South Africa, which Brad so eloquently describes as, "A very large land filled with some very exotic animals."

Unlike, say, Survivor, the animal b-roll during this show is totally incongruous with what's going on and communicates very little about the actual vibe of the show.  But they are pretty cool anyway.  Lots of hippos.  Lots and lots of hippos.  Hungry hungry hippos, who I start to worry might mawl the couples and end the show right here.

Chantel O. and Brad go on a safari for their date, which seems to surprise her despite the fact that she's literally wearing a safari shirt.  When she asks about their activity for the date, even Brad says, "What do you THINK we're doing?"

They see sleeping lions.  They see hippos, of course.  They see giraffes, which Brad describes as "beautiful" and Chantel eloquently adds, "In like a weird way."  Yes, Chantel.  Like a giraffe.

At dinner, Brad explains to Chantel that when he talks about his own family he gets very "intense" and "fired up" and I'm not entirely sure that Brad knows what "intense" means cause I'm doubtful that he's ever gotten "intense" in his life.  But he does tell Chantel that, though he isn't supposed to say this, she's the woman with whom he feels most comfortable.

Then, the inevitable "fantasy suite" card comes out, supposedly from Chris Harrison, but written by some P.A. somewhere (which is by far the best part) and Chantel jumps at the chance to jump Brad.  They're off to some tree house with no roof and instead of coily watching the bedroom door close in slo-mo, we see the lights turn out in the tree and we hear Chantel giggle.  Ew.

Emily wants to tell Brad that she's falling in love with him on her date and, honestly, I'm confused, maybe because Brad only has two expressions: neutral and flummoxed.  It seems like he's avoiding touching her and like he doesn't really like her since he met the kid and totally panicked.  And when he tells her he's ready for a five-year-old and that he "misses" her daughter, I don't believe him for a hot second.  Though I do love to watch him panic.

BUT, after she accepts her fantasy suite card and explains subtly that they will only be talking, she tells him that she has those feelings.  He looks down, as if he is freaking out, and says that he "wasn't expecting to hear that."  And still I'm thinking that he wants to dump her and now he's worried that it will be even harder.

But then he breaks the rules yet again and tells her that he is falling in love with her too.  They seem so awkward around each other, but I guess Brad really wants to like her.  As C. said brilliantly, Emily is aspirational for him.  Aspire and prespire away, Brad!  (Seriously, he can't stop sweating).

Lastly, Brad takes Ashley on a helicopter ride (her greatest fear–guess the producers saved that one 'til the end) to God's Window, which is BEAUTIFUL and I'm starting to feel resentful like this is all wasted on them and really I should be on this trip.

But the date goes terribly wrong.  Ashley's enormous ambition (to be a dentist!) is again an issue and, when asked where she'd like to live, instead of just saying "Austin" which is so OBVIOUSLY the correct answer, she says she used to think hot weather, but now maybe in Maine near her sister.  What?  The man owns bars in Austin and can't leave.  You're a dental student.  Why would you not say, "In Austin, Brad, but maybe I'd like a summer home in Maine!"

But they get into basically an argument and I learn that I LOVE pissed Brad much better than nice Brad.  He tries to lead her about 1,000 times into giving him the correct answer, but he just can't cause she shuts off and gets all pouty.  Basically, it seems like she's not ready for "love" and she reminds Brad of himself before all the therapy.  They head to the fantasy suite, but then literally just talk about the mosquitto netting and she actually says, "We're off our game."

At the rose ceremony, Brad pulls Ashley aside and tries one last insanely frustrating time to lead her into saying the right thing, but she just won't.  I'm wondering if she's going to watch this and feel like a total idiot and suddenly I'm realizing that maybe he actually liked this girl the most.  He says he wishes things could go back to how they were before with Ashley … um, THREE WHOLE WEEKS AGO.

But alas, you can never go back and he sends her packing.  Bye bye, Ashley!  Good luck with the teeth.

And he's left with Emily and Chantel and we see him cry in the scenes from two weeks from now and I can't believe we have to wait two whole weeks – through insipid "Women Tell All" – to see the finale, which will apparently still be in South Africa.

Until then: Hakuna Matata.