The Lint Collector: The Bachelor or “Despicable Ben” 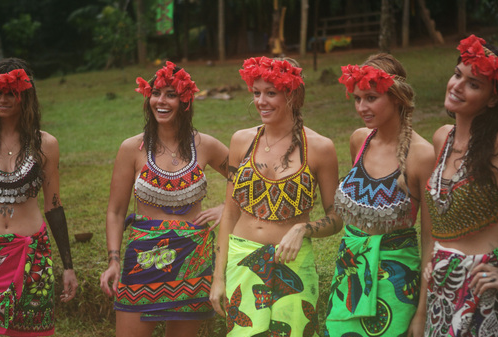 This week, on the most unwatchable and cringe-worthy episode in Bachelor history, many interesting things happened.  But I only know about half of them because I literally couldn't bring myself to watch the humiliation.  I had to avert my eyes.

The crew arrives in Panama City and Ben says they're starting off fresh … again.  It sounds like he's hoping.  I am watching with my friend A.P., who is basically a dating expert, and she calls it right away: Ben is feeling both distracted and guilty about the Courtney skinny dipping.  I totally agree.  On one hand he's obsessed; on the other he feels like he broke the rules or betrayed the other chicks.

Anyway, Ben & Kacie B. go on her second one-on-one date.  Courtney "the model" hopes the sweet and innocent Tennessee girl will get sent home, but that is so not happening yet.  Kacie B. & Ben F. go to some deserted island by … helicopter.  What else?  When he reveals the date plan, I think I even detect a note of irony from him.  Or maybe he's just constipated.

Anyway, they cut open a coconut, she thinks he's hot and everything seems basically fine, except he seems a little grumpy and distant and he barely touches her.  He doesn't crack a smile.  Does he not feel it anymore?  Is he burnt out on the process?  Does her innocence seem lame in the face of Courtney's midnight hand jobs?

There's only one clear answer to that bevvy of questions and extreme over-analysis: He's just not that into her!

Maybe I'm just not that into him.

I dunno, man.  I just think he's an asshole.  He's condescending and arrogant and believes his own hype and he's too cocky about being the object of a model's affection to notice that Courtney is out of her gourd.  I've decided he's almost as bad as weird aggressive Jake Pavelka.  What say you?

Anywaaaaay, Kacie B. reveals – in answer to some very clipped and rapid fire questions from Ben – that she's particularly mature because she used to have an eating disorder.  And in case you were wondering which one, she reveals that her parents "caught" her in the act.  T.M.I. for The Wine Guy?  Ben can't send her home in the face of that information, but he seems like maybe he wants to — which I admit is very surprising to me.  I usually think he likes this girl. Maybe he's just bummed about the state of his hair, but it sort of seems like he wants to send everyone home and take a nap.  No sense of humor this guy.  He has the vibe of a spoiled child, all sour.

The group date is a canoe trip and Ben perks up (no pun) at the sight of Courtney's boobs, when they all put on traditional garb and she chooses to go without a cover-up under intermittent beads.  Ben thinks this is great because she gets into the spirit of things and also he gets to see her boobs.  But she clearly hasn't embraced anything cultural because she just walks around shaking her exposed breasts at everyone back-and-forth and then looking down and admiring them.  She even shimmies them at a group of small children.  Ew.

As usual, she monopolizes Ben's time, but it's Lindzi who gets the rose.  He likes that the horse girl is laid back.  And who can blame him?  At least she's not drama.  They both agree that they don't believe in fighting, which is weird because he seems filled with rage.  Also, fighting isn't like Santa Claus.  It's not really a debatable thing.

Meanwhile, Jamie (Who? Yes, I know, you've never seen her before!) decides to try to come out of her shell and kiss Ben, but gets distracted when Courtney intentionally struts around in a white bathing suit behind them.  She is so painfully obvious that I can't believe Ben can't see through her crap, but then maybe he doesn't care because she's so pretty.  I want to believe that better men would find her pathetic despite the hotness, but – let's be honest – maybe not.  This is going to sound weird, but I think Brad would have sent her home by now.

Meanwhile, after being condescended to yet again by Ben, who actually hates the fact that she's smarter than him despite claiming the opposite, Emily the Ph.D. apologizes to Courtney for having bad mouthed her (who knows why?).  Courtney seems at first like she might accept, but then informs her blond nemesis that she's not just going to "bend over."

The next day is a two-on-one with Blakely (The "VIP Cocktail Waitress" a.k.a. escort) and Rachel-with-the-bangs.  That means that one person has to be sent home during the date.  Blakely is at least feigning bizarre excitement over the date, even though everyone watching is like – bye bye.  So obvious that she won't last.

The date happens.  They salsa dance, which Ben says is "sweaty and sexual."'  Blakely is better because, well, I think she's a stripper, no?  Plus, she can stomp, remember?  It's awkward.  But it's not THAT awkward until Blakely pulls out a scrapbook all about Ben that looks like a project some pre-teen girl made in middle school detention.  Maybe in special ed.  Sorry.  But it's true.  It's humiliating enough that she's a grown woman spending her time doodling his name, but then she can't stop crying too.

Then they do this: 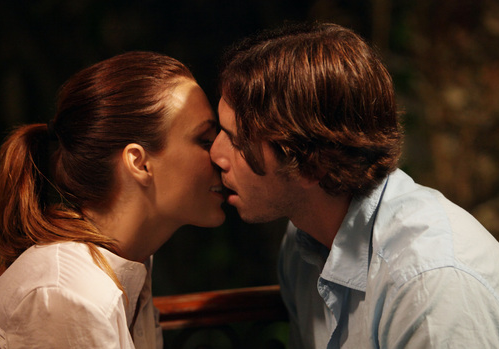 Then, what seems like two minutes later and not a trick of editing, he sends her packing.  It's a bad scene.  I mean, why would you stick your tongue down her throat, just to send her home?  He had to know what he was doing by then!  He so has no right to fault Ashley H. for letting him get on one knee.

Anyway, he walks Blakely to the van and she sobs on his shoulder.  Seriously.  She won't let go.  Of course, he uses his signature suave line, which OBVIOUSLY makes the girls feel worse: "I'm just so much farther along with other women."  Do you always have to say "SOOOO," Ben?  I wish one of them would tell him off.  I want to write him a letter.

Anyway, next the girls are hanging out, when Chris Harrison comes in and asks to speak to the other Kacie.  Kacie H.?  Kacie S?  Who knows?  Again, you're probably saying, wait who???  This is Courtney's blonde beta, who basically never talks or gets on camera. Chris Harrison says he's heard she's still in love with someone else in Chicago, but I think this is a reach.  It turns out that she has an ex-boyfriend who won't marry her, who she's trying to get over.

Chris brings her to see Ben and tell him and, because Ben F. is SUCH A DOUCHE, he's really mean to her about it.  She ugly cries and we have to watch her sob incoherently about a relationship at home that seriously has no bearing at all on the show.  "Maybe I need to be in therapy," she wails and I think she has a good point.  But she didn't come on under false pretenses.  She just wanted to be free of this former attachment.  But Ben is pissy.  He tells her he thinks she should go home, as if he's commanding it, even though she's obviously already going home.  That's why she's THERE, stupid.  Stop trying to act like it was your decision.

Anyway, just when you thought things couldn't get more pathetic, Jamie decides to make her move at the cocktail party before the rose ceremony.  She gets Ben alone and awkwardly tells him that she thinks about "doing things" with him at night.  Then, in a dress where she really can't move her legs, she proceeds to try to climb on top of him and straddle him.  But she's shy and this is not her thing and it's just awkward.  And every time they start kissing, she starts giggling and, since he is so effing bitchy this week, he reprimands her for laughing.

She climbs off and they try kissing again with her literally instructing him on when to open and close his mouth and then FINALLY it stops because he says he can't take it anymore.  Neither can I!  And the rest you will have to Youtube because I hate scary movies and this was basically a horror show.  My eyes!  My eyes!  My ears!  My ears!  I will never truly recover.  This was not for the Bachelor novice.

Well, it's no mystery who is going home, although Jamie says she doesn't know what Ben is thinking.  Really, Jamie?  You seem like a smart girl relative to the others.  You don't know where this is going?  Well, maybe you just lose perspective when you're being brainwashed for this show.

Anyway, he sends Jamie home and they're off to Belize because … well, it's close by.  And at least Courtney doesn't announce that she was just there two months ago this time.

And, just like that, another Bachelor episode comes to a close.  Although this time I feel I need some time to recover.