THE LINT COLLECTOR: THE BACHELORETTE, MADE IN TAIWAN 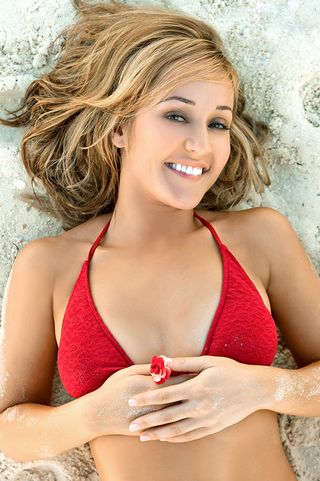 Thank the lord that The Bachelorette has returned — it's been a rough couple weeks — with a special Emily interview (booooring?) at the end about why she and Brad are over.  Emily is mos def the next Bachelorette, although that's like a million years away because there has to be a Bachelor before that.

Moving on … this episode begins with Ashley explaining why she likes each guy.  Ryan makes her feel safe (a.k.a. he kisses ass), Ames is unique (euphemism city), Ben is smart and Constantine is easy on the eyes etc. etc.

Okay.  I need to pause.  Am I crazy or is this an Emperor's New Clothes situation?  That guy is NOT cute.  He's got bad hair and droopy eyes.  I don't get it.  But maybe that's just me.

They're in Taiwan, which looks pretty.  JP is freaking out because he just wants to be alone with Ashley.  He's not a particularly creepy dude, but if he was, I would be thinking restraining order.  He's obsessed.  Why??  No one knows.

Anyway, the remaining four guys at the end of this episode will take Ashley to their respective homes, which is exciting because I love the hometown dates, but upsetting because it means that there are only so many episodes left.  I'm panicking in advance.  How will I survive without this show?  I might have to actually leave my house!

First one-on-one is with fugly/hot guy Constantine.  She just "sees something" in him, even though the relationship has moved slow.  Yeah, Ashley.  What you see is called disinterest.  He's not that into you.  But apparently that's your favorite trait in a man.  She asks him if he's looking for love on this trip.  He says yes.  Yeah — the greatest love of all.

They arrive for a lantern festival, during which they'll make wishes.  Constantine is taking the lantern thing "seriously," so Ashley says that means that they might actually have a future together.  I think we're missing a logic step somewhere in there, but whatever.

He is all about himself.  He says he wants her to fit into his life, his family etc.  And, at dinner on their date, he asks what she likes about him.  She says that physically, he is exactly what she likes (barf) and that she likes that he holds back a little bit.  Oh Ashley.  Please book a session with Brad's therapist from last season.

Constantine likes her answer.  It's "genuine as hell" because she sees him like he wants people to see him.  OMG.  Ashley!  RED FLAG CITY!  They both say that their relationship has turned a corner.  Keep walking!

Next date is with Ben F. "The Wine Guy."  I think she should meet his family just so she can go to Sonoma, but I have a bad feeling she's sending him home.  Maybe because they keep showing him talking about how confident he is.  They moped around and he says it feels like a fairytale.  Where's a poison apple when you need one?

He's confessing his feelings for her and she's sort of quiet, which could be because she doesn't feel the same way or could be because she's not allowed to agree.  Doesn't he know that she loves guys who hate her?  Oh, but then she says she might be falling in love with him.  So I guess there's your answer.  She says it feels like he's her boyfriend — they're just really comfortable together.  Too bad he's not as hot as Constantine (gag).

Ben doesn't come home from his date until the next morning, which makes JP freak.

JP, Ames and Lucas arrive to take wedding photos with Ashley, which supposedly shows Ashley what it would be like to be married to each of them.  Um yeah.  That's a pretty clear indicator of your compatability, dressing up and taking pictures.  I notice that Lucas is balding.  Maybe it's just because I don't like him, but that seems like another strike against him.

The men have to put on these absurd Taiwanese outfits (absurd in this context).  Lucas is in a traditional gold ankle length skirt-like outfit.  Ames is in a turquoise suit and pink shirt kinda sitch.  And, for some reason, JP is in a normal tuxedo.  I sort of feel like Ashley and The Bachelorette producers are making a mockery of an actual cultural tradition, but whatever.  What else is new?

JP is grouchy and he's not even hiding it in front of Ashley.  Lucas admits he had only an "okay" time on the date because he had to wear a "dress" and he's a "traditional guy."  That means conservative and chauvinistic in this case.  Ames is kind of refreshing, even though he's weird, because at least he's different.  But he's chosen to wear red pants of his own volition during the second half of the date.  Ruh roh.

JP admits that the whole situation has made him crazy.  Ashley pretends to be concerned, but we can see in her eyes that she LOVES it.  She probably wants Ames to get another concussion.  She gives JP the rose.  DUH.  They're going to NEW YORK!  And by New York, I mean Long Island.

Ashley is wearing a backless shirt for her date with Ryan, which I have to admit, she can wear.  She looks better than usual, not like it matters with Ryan.  He's wearing pink.  Of course.

They go to a temple.  Ashley says, "Isn't this amazing?"

Ryan says, "This is."  Then he makes a fist around her hand and repeats, "THIS is."

She ain't feeling it.  Ryan is on "cloud 10."  But she is sending him homesville because there's no connection and she can't stand talking to him about meeting his family, when she knows she never will.

This is cringe city.  She dumps him, pretty gracefully actually, and then he says, "You don't want to meet my family?"  Wait — are we about to see the super cheerful facade crack?  I'm worried about this guy, truth be told.  He looks … UPSET.  Up that Prozac dosage, doc.  Again.

He stops mid-camera interview and is cursing by himself in the bushes, trying to stop from crying, I guess?  He wants to say that he wants to love someone and find the right person, but he can't quite get it out.  He wants "real love."  Someone to set my heart free.  Real Love.  Sing it, Mary J.!

At the rose ceremony, I'm thinking Lucas is going bye bye.  But we shall see.  And, yes, he is.  Bye bye.  I kind of think you were scary, even if all you want is "someone to cook breakfast with in the morning."

And now it's Emily interview time.  She still looks like Malibu Barbie, but a sad one, I guess.  She starts out crying from the very beginning.

OMG.  About Brad, she says, "We left the dot, dot, dot," which makes me know that she's watching this season and Bentley!  This show is AMAZING.  She's sad.  That's sort of all you need to know.

And then comes a genius out-take from the episode, where a dog pisses on Constantine and Ashley's love lantern.  Me too, doggy.  Me too.

And now we have to wait another week to visit wine country and strong Island.  So be it.